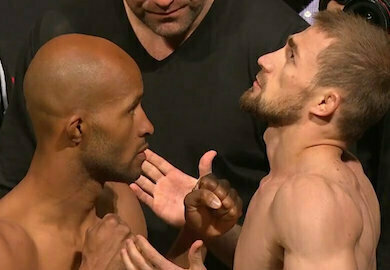 “I’m not Ali’s (Bagautinov) lawyer, but I want to draw attention to several circumstances about this decision of Athletic Commission.

We are talking about a doping sample, which was taken not on the fight day, not before and not after the event (UFC 174), but two weeks before the show…

Two weeks before the fight Ali took the test, at this time he was still in Albuquerque. Four days after, we were informed that the samples are clean, that there were no illegal drugs found in the test. Otherwise he would not be allowed to fight.

Ali flew to Vancouver to fight “Mighty Mouse”, the following samples were taken from him before and after the match. The results of these samples are not made ??public. In my opinion, publication of the results – and I hope they are clean – can significantly affect the decision of the commision, that is to either cancel or reduce the suspended period. At least, we hope for it.

About a week ago, we received the first message from the Athletic Commission of British Columbia; that Ali has a problem with the sample taken on June 2. We hired a lawyer and asked the Commission to arrange a public hearing…Our request was ignored and Athletic Commission announced that it would decide first and then would deal with the appeal.

Now Ali has the opportunity to appeal the decision within 30 days. During this time, the lawyer will prepare a clear position on the part of Ali, and I think that there is a good chance to win this case.

Such cases are not rare in America… In our case things turned differently, I think, and Ali’s reputation is harmed.

There are so many circumstances about doping test: how the sample was taken, under what conditions, who has put the samples in the fridge, who was present at the opening of the sample, etc. Why were we not present in this case? There are lots of legal nuances. The lawyer said that we must have an open hearing and in this case there is a good chance to win.

I believe that the Commission hastened to publish the results..

What’s next? In any case we will accept any decision that will be made. If Ali will have to lose some time, being disqualified – the main thing is not to give up and to not fall out of the training process. Especially, as shown after the fight with Demetrius Johnson, he has something more to improve. And immediately after the disqualification return and do the thing in a cage. There is still time.”

The Russian Sambo expert is currently in the midst of serving a twelve-month suspension for the infraction and will likely be forced to pay fines as well.

You can read more about Ali’s failed drug test HERE.