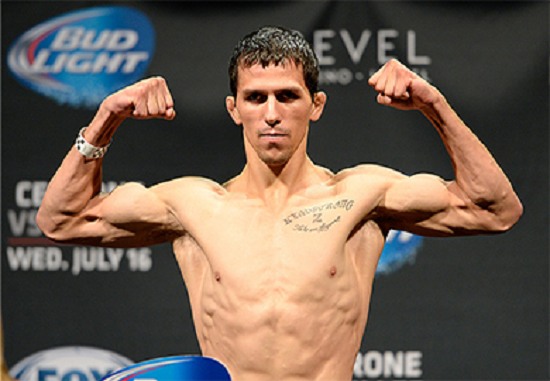 Many pro fighters have a day job to support themselves while they pursue a UFC contract. Alex White was one of those fighters up until recently.

After being TKO’d by Lucas Martins in July, White quit his job to focus on training full time.

He spoke to MMAJunkie about the lifestyle change, and how it will benefit him in his fight against Clay Collard this Saturday at UFC 181.

“I’m just training now, that’s it. (I stopped working) partly because of the loss. It opened up my eyes to what I need to do.”

“I feel like if I’m going to get anywhere in the UFC, I have to give it my full attention. There’s even bigger game out there than Martins. It sparked a fire under my butt.”

“I realized after that loss there were so many things I should have done that I didn’t. I worked on my wrestling a lot before that fight and I didn’t show one spec of it. I’ve really got to mix my game up instead of just doing a pissing contest and stand up. I need to mix it up.”

Tune in to UFC Fight Pass to see these two go at it on Saturday night prior to UFC 181.