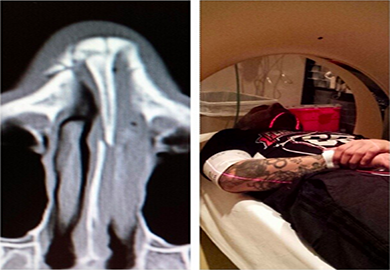 We saw action from the get-go as Blanco quickly took to the middle of the octagon and backed his opponent up against the fence. Blanco took Corassani down and started unloading heavy blows, trying to end the fight quick. Corassani was attempting to wall-walk his way back to his feet until he ate a knee to the skull. The issue? Corassani’s hand and knee were on the ground, deeming the knee an illegal blow to the head of a downed opponent.

After the bout was paused due to referee intervention, Corassani immediatly asked “What happened?” which is never a good sign. After a minute of watching Corassani roll around the mat writhing in pain, the referee decided to stop the bout.

He posted an update on Instagram of the injuries he suffered which includes a broken nose in five different places.

“Broke my nose in 5 places which was not as bad as the concussion from the knee. The dizziness got worse gradually and I was rocked as hell. Truthfully I don’t remember much but this was not the way I wanted to win, I was more than ready for this fight and due to a stupid move the fight was ruined. Thanks for all your support and I’ll be back soon!”