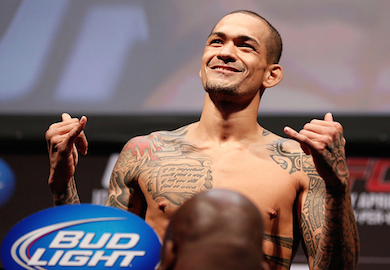 Cannabis in MMA is a widely spread and often tolerated narcotic.

It’s illegal in the United States to use and/or possess the substance, but in some outlining States they tolerate marijuana for recreational and/or medical use.

For most athletes, staying clean and all-natural in your diet is crucial to being able to deliver a peak performance.

Yancy Mederios is no different.

Which is why the Team Cesar Gracie fighter doesn’t think MMA’s governing bodies should penalize the athletes for ‘toking’ on the green.

His words via Bloodyelbow.com’s Trent Reinsmith:

“I think it’s a big hindrance towards a lot of people – towards a lot of athletes and fighters because a lot of them, like for me, I don’t take any pharmaceutical drugs. Everything that I consume is all natural, all organic. It’s tough now, I don’t even take ibuprofen for headaches, so it’s rough. So, if it would change it would be great, but for now, it is what it is.”

When asked if his fighting team tries to influence his sobriety, the Hawaiin born fighter responded with,

“[Nick and Nate Diaz are] my brothers, they don’t instill any negativity on me, and they respect my decisions, and my choices and they’re there for me as a family and at the gym.”

Yancy’s decision to go clean is a result of his failed drug test last November that turned his first UFC win over Yves Edwards into a no-contest.