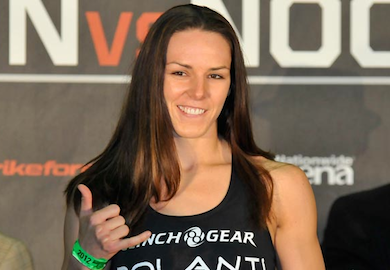 Alexis Davis (15-5 MMA, 2-0 UFC) proved that she is one of the top contender’s in the UFC’s women’s bantamweight division by defeating Liz Carmouche (9-4 MMA, 1-2 UFC) in the co-main event of last night’s “UFC Fight For The Troops 3” event at Fort Campbell in Kentucky.

According to UFC president Dana White, Alexis Davis has put herself in “good position” following her win over former #1 contender Liz Carmouche. Here is what Dana had to say during the post-fight press conference:

“I have a lot of respect for Liz Carmouche, and I think she’s a great fighter, and [Alexis] absolutely picked her apart tonight,” stated the UFC president. “She shut her down. She made her tentative. She made Liz feel uncomfortable, like she couldn’t throw any punches or anything. I thought she fought a great fight tonight.”

“Obviously, the women’s division, with Cat Zingano hurt, and this fight’s going to happen with Miesha and Ronda, who knows. We’ll see what happens. The win she had tonight was very impressive and definitely puts her in a good position.”

The Canadian women’s bantamweight standout, Davis, has now won four fights in a row. After defeating former #1 contender “Girl-Rilla,”  Alexis believes she has earned the spot of top contender as she stated at the post-fight press conference:

“It doesn’t matter who has it. I want that belt. We’ll have to see what happens. I won’t be greedy! I’ll take Miesha or Ronda. I think I should be [top contender].”

Was Davis’ performance against Carmouche good enough to warrant her a shot at the UFC’s women’s bantamweight championship? Let’s hear your thoughts Penn Nation!