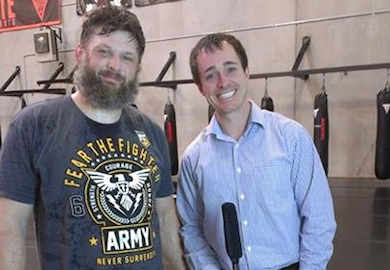 “I figure that I’ll get down to 205 faster than Daniel. If I beat Daniel, wouldn’t I get a title shot? My goal is just to beat Daniel. My goal is to fight the champ. Right now, Daniel is in front of me, so I’m trying to beat him…in everything he does. I’m hearing that if he beats me, he’s supposed to get a title shot at 205; he gets to jump to the front of the line. I’m all about jumping to the front of the line. My mode of thinking is that he’s number 2, and if I beat him, my next step after that would be to fight for the belt, in either division.”

Roy Nelson faces Daniel Cormier at UFC 166 in just over a week’s time. If Cormier wins the fight he has been all but promised a shot for the UFC’s 205 pound title.