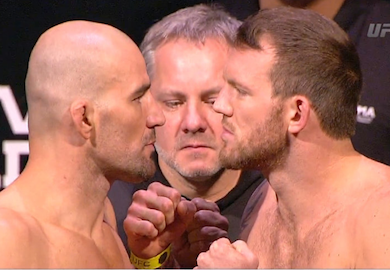 “It pisses me off that everyone is overlooking me. He’s talking about a title shot, other people are talking about a title shot. Fans are saying I don’t have a chance and how good the fight is going to be between [Teixeira] and Jones. But he has a tough fight ahead of him on Sept. 4 and I’m looking to spoil all their plans. UFC is saying that he gets the next title shot with an impressive win. A lot of people are going to be upset on Sept. 4. I’m going to come out and take everything away from them.”

In tonight’s main event all eyes will be on Glover Teixeira.

Glover is expected to win and then challenge Jon Jones for the UFC light-heavyweight title.

Standing opposite will be TUF winner, Ryan Bader, who recently told ESPN that he is pissed he’s being overlooked and hopes to derail all this title talk.