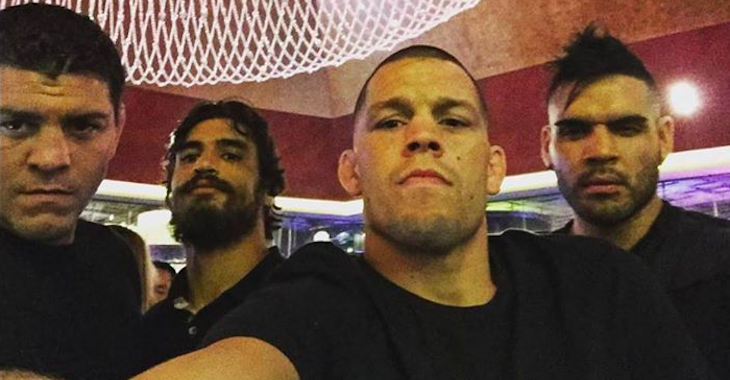 Nate Diaz, Nick Diaz and the rest of their crew stand tall after attending a controversial World Series of Fighting event in Las Vegas on Saturday night.

The Diaz Brothers went to “WSOF 22” to support Jake Shields in his fight for the title against Rousimar Palhares. Tensions ran high after Palhares cranked on the kimura long after Shields submitted, but the drama did not stop there. The Diaz Camp and Khabib Nurmagomedov’s crew were involved in an altercation in the stands. Reports say that things got physical and a brawl broke out.

Allegedly, there was a second altercation between the two parties AFTER the event ended. The cops arrived by the time things settled down and nobody got in trouble with the law. After all the dust settled, Nate Diaz posted the following picture to his Instagram:

Who do you think would win if Nate Diaz and Khabib Nurmagomedov met in the octagon? Share your thoughts in the comment section below!