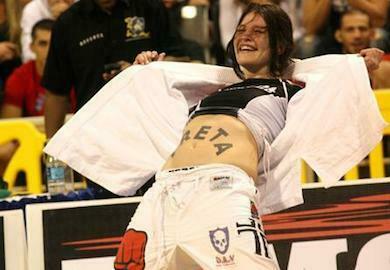 Just days after Bellator President Scott Coker reinstated the women’s division to Bellator by bringing in top featherweights Marloes Coenen and Julia Budd, Bellator has a new addition to the roster as Brazilian Jiu-Jitsu ace Talita Nogueira (6-0) has joined the promotion. Currently ranked in the Top 10 Featherweight rankings, the multiple-time jiu-jitsu champion will now call Bellator home and is excited about what the future has in store.

“Joining Bellator is like a dream come true,” Nogueira said. “Since I began my MMA career I wanted to compete in a promotion like Bellator so I want to thank Scott and Rich for bringing back women’s MMA to Bellator and I promise I will train harder than anyone to put on entertaining fights for Bellator.”

Beginning her MMA career in 2009, “Treta” was a spotless 4-0 before walking away from MMA to focus exclusively on jiu-jitsu. In 2013 Nogueira returned to MMA and collected two more first round submission victories, and now has the opportunity to compete inside the Bellator cage on Spike TV.

“We are always excited when we can bring in a talent like Talita to the organization,” Coker said. “This is just the beginning for women’s MMA here at Bellator. We want to make a very serious commitment to this division, and this is just the start.”