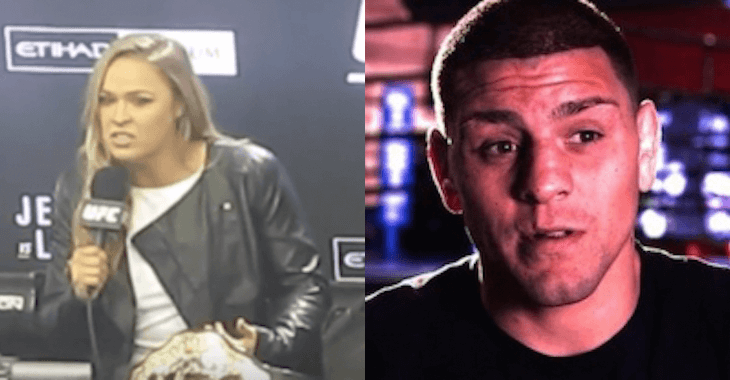 At the UFC 193 press conference in Australia yesterday, UFC champion Ronda Rousey took a moment to talk about the Nick Diaz/NSAC news and spent some time going off on the commission and the decision to suspend him for five years because of marijuana.

You can read the comments below, or watch the clip at the bottom!

“I’m sorry; I know no one asked me anything, but I have to say something. It’s so not right for (Diaz) to be suspended five years for marijuana. I’m against them testing for any weed at all. It’s not a performance-enhancing drug. It has nothing to do with athletic competition, and it’s only tested for political reasons so they say, ‘Oh, it’s only for your safety so you’re not hurting yourself when you’re out there.’ So why don’t they test for all the other things that could possibly hurt us that we could be under the influence of while we’re out there?

“There’s no reason for them to be testing for weed. In athletics, the beautiful thing about it is it separates everything from politics. It shouldn’t be involved at all.”

“It’s so unfair if one person tests for steroids that could actually really hurt a person and the other person smokes a plant that makes them happy and he gets suspended for five years, whereas the guy that could hurt someone gets a slap on the wrist. It’s not fair. It’s not fair at all. It doesn’t make me a bad person for saying it, it just – I can’t believe it’s not being said more. I think they really should free Nick Diaz, but it’s not (UFC President) Dana (White’s) decision either.

“I don’t think marijuana should be part of the conversation at all. I think it’s an invasion of privacy for them to test for it, and they have no right.”