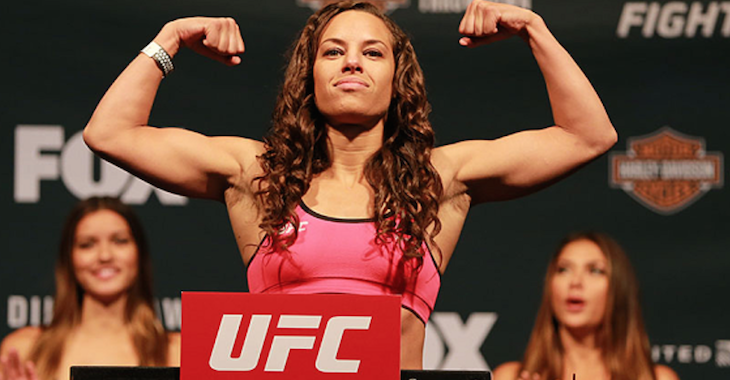 The women took the octagon in the second fight of the night when Jessamyn Duke took on Elizabeth Phillips.

At the start of the fight the much shorter fighter, Phillips, came in close and started swinging. Duke ate a lot of big punches early. Duke tried to get the thai clinch in order to land big knees. Phillips again jumped in and landed a few big punches. Duke landed a good head kick when Phillips moved in for a clinch. Phillips ate it and still got a hold of Duke, she went to throw her and Duke immediately went for an armbar. Phillips was able to get out of it and take top control in Duke’s full guard. Phillips kept top position, Duke again tried for an armbar, but it was shrugged off and Phillips took side control. Then she took mount and started unloading on Duke. Duke rolled and gave up her back. Phillips went for the rear naked choke with thirty seconds left. She wasn’t able to get it before Duke reversed and took top control right before the round ended.

In the second Duke seemed to be landing more at the start of the round. They clinched on the cage and Duke pulled guard, going for the guillotine. Phillips survived and took top position, in half guard. With about two minutes left Phillips took full mount, only to be reversed. But then Phillips regained top control. Phillips really was wining everything on the ground. She worked from the back of Duke. Duke reverses and gets stuck in a guillotine, but Duke gets out and goes for a leg lock at the end of the round.

In the third both fighters came out swinging. Duke was listening to her corner and really going for a finish. She was landing often. Duke threw a kick that Phillips caught. Duke got out and took Phillips down. Duke almost had a tight guillotine and it looked like it could be over but Phillips got out and to her feet. Phillips was visibly winded. Duke put the pressure on and tried to take her out on the feet. Both fighters were tired. Duke got Phillips down again with about a minute left. Duke tried for a rear naked choke. She landed punches and looked to lock it up. She switched to an armbar with time running out. Right as the bell rang she managed to straighten out the arm. She simply ran out of time.