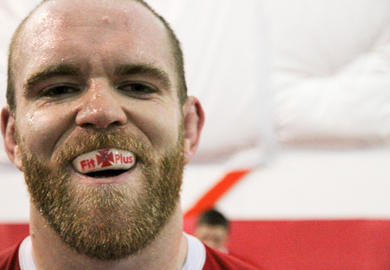 TJ Grant recently spoke on the ESPN UFC podcast about numerous things ranging from TRT to Anthony Pettis. Grant, who has been quiet on the situation of Pettis asking for Grant’s August 31st title shot against Ben Henderson, opened up with his thoughts on the situation saying:

“I wish it was handled a little differently; him of all people, I think it was disrespectful, to do that against someone who has earned the right to fight is not right.”

“Unfortunately he got hurt but it was low class, I thought. I didn’t want to get into the whole talking thing. I got here legitimately and earned it. Ultimately, what he was saying was that he wanted my title shot which was incredibly disrespectful. It was pretty dirty.”

“He’s 26 years old and hes a great fighter I think he’ll be a champion one day, but this is my time right now.”

“It’s in the past now: He’s out, I’m in. It’s going to be a series of little battles in a big battle against Benson Henderson. He’s the man, and I want to beat the man and be champion. It’s what I’ve always wanted.”

Pettis, who was set to face Jose Aldo August 3rd had to withdraw from the fight after suffering a partial tear in his meniscus, is still opponentless as of right now.

TJ Grant on the other hand is set to face Benson Henderson for the lightweight title on August 31st.