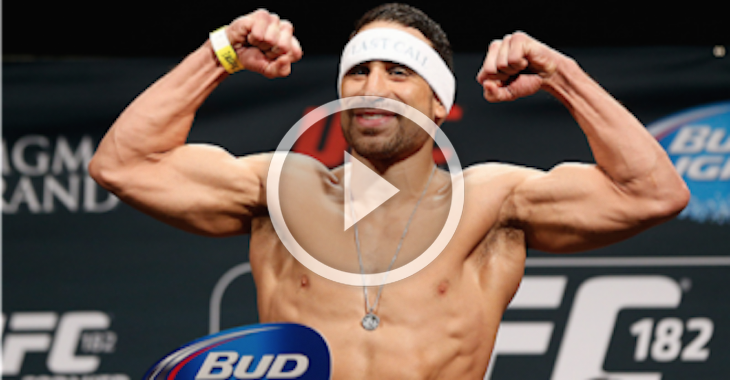 UFC lightweight Danny ‘Last Call’ Castillo is known for his flashy weigh-ins. He usually wears a tear-away tuxedo, a white headband and a pair of his Jordans, from his personal collection.

Now, with the new Reebok deal, those days are gone. At UFC on FOX 16 this past weekend, Castillo was forced to conform to the new dress code, which consist of fighter only wearing official Reebok gear.

They almost didn’t even let him wear his own shoes, which were Reebok.

Check out what he said on last night’s Stud Show Radio:

“Yeah, I couldn’t wear my tuxedo or my headband.”

“It was kind of cool though, when we got there, there was a seamstress on hand. That’s what I was worried about because I saw Faber wearing one of those Reebok jumpsuits and it looks like he was wearing pajamas. It’s like a real bad, 80’s type jumpsuit.”

“I brought my own pair, from my personal collection. They weren’t going to let me wear them because the new Reebok logo doesn’t match the old one. The pair of shoes I had, had the old Reebok logo. It was just a bunch of bullsh*t. They gave me clearance after three days.”