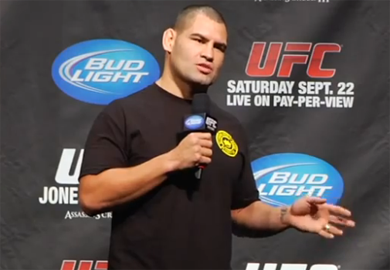 @arielhelwani @danawhite just told us in The Temple Bar.. Cain v Big Foot and JDS v Reem in May! You heard it here first! #DanasInDublin

Dana White is currently in Dublin, Ireland for two days to receive a Gold Medal of Honor from Trinity College. Apparently Dana is also having a good time with his sidekick Nick the Tooth at a local hotspot called The Temple Bar. There are pictures posted on Twitter of Dana White, Nick the Tooth, and an Irish fan, @cbeegan90. This is where the facts end, and the rumor begins. The Irish fan has posted on his twitter that Dana told several of the bar patrons that a May fight card would feature Cain Velasquez against Antonio “Bigfoot” Silva and Junior Dos Santos against Alistair Overeem. If the rumor is true, we are in for quite a show.