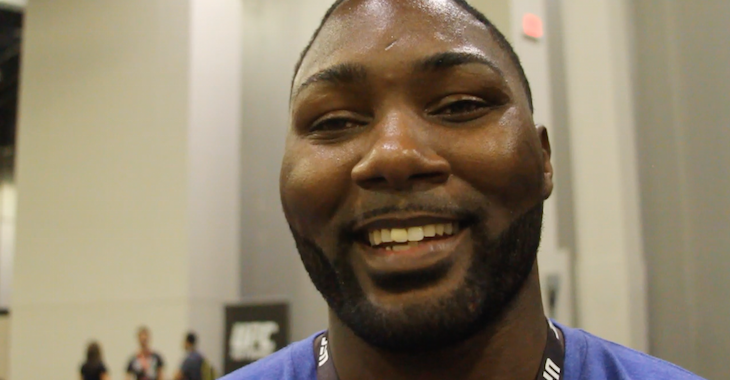 Ryan Bader (19-4 MMA) had good reason to be disappointed and upset when he caught wind that the UFC had pegged Alexander Gustafsson to be the next man to challenge Daniel Cormier for the UFC’s coveted light heavyweight title.

After all, Bader was riding a four-fight win streak in the division, while “The Mauler” was coming off a first-round knockout loss to Anthony Johnson.

The UFC’s controversial decision was made final and with that said “Darth” will now face former light heavyweight champion Rashad Evans at October’s UFC 192 event.

The last man to challenge for the UFC’s light heavyweight title, Anthony “Rumble” Johnson, recently sat down with MMA Fighting where he gaves his take on the Bader situation:

“In my opinion, Bader deserves it,” Johnson told MMA Fighting. “He’s on a four-fight win streak. He deserves it. I fought three times and I got a title shot. Bader fought four times and he’s still behind me.”

“Rumble” also shared his thoughts on why the UFC may have passed up on Bader in favor of Gus:

“I think it’s about selling tickets. Selling tickets and getting the fans excited,” said Johnson. “He has to go out and start knocking people out instead of sitting there and waiting and side-to-side and throwing jabs. Whatever he does. That’s just not entertaining people. Bader doesn’t talk that much and when he fights, it’s just not that entertaining.”

Do you agree with Johnson? Does Bader need to becoming more entertaining in order to receive a title shot? Sound off Penn Nation!