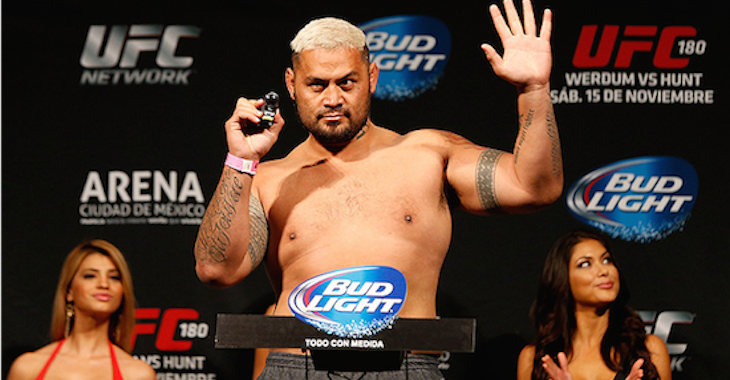 A heavyweight rematch between Mark Hunt and ‘Bigfoot’ Silva is being targeted for November’s UFC 193 pay-per-view event in Australia.

MMAFighting.com was first to report the news, stating that verbal agreements are in place from both parties.

“The Super Samoan” and “Bigfoot” first met at UFC Fight Night 33 in Australia in December of 2013. The fight was an absolute war which resulted in a majority draw, as one judge had the fight 48-47 for Hunt, while two others scored it a 47-47 draw.

The five-round heavyweight blood bath was given “Fight of the night” honors, however, Silva later tested positive for elevated testosterone levels. “Bigfoot” was eventually suspended for nine months and Hunt was awarded Silva’s $50,000 bonus money.

Mark Hunt (10-10-1 MMA) has gone 1-2 since his first encounter with Silva. “The Super Samoan” is coming off back-to-back losses which he suffered to current heavyweight champion Fabricio Werdum and top contender Stipe Miocic respectively. Prior to the setbacks, Hunt was coming off a second-round knockout victory over the ultra-tough Roy Nelson.

Meanwhile, Antonio Silva (19-7-1 MMA) has also gone 1-2 since his war with Hunt in 2013. “Bigfoot” was most recently seen in action earlier this month at UFC 190, where he scored a second-round TKO victory over Soa Palelei. Prior to that, Silva had suffered back-to-back first-round knockout losses to former champs Andrei Arlovski and Frank Mir.

Who do you have winning the rematch? Sound off Penn Nation!