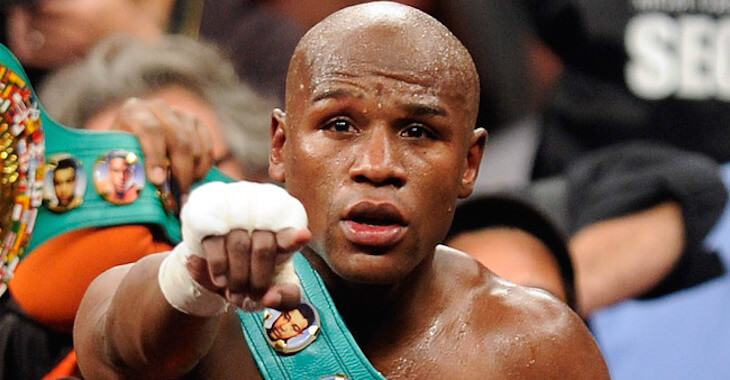 Well the time has finally come. Floyd Mayweather stepping in to the ring for what is supposedly his final fight.

He took on Andre Berto, who is 3-3 in his last six fights. Yeah, exactly.

The first fight was all Mayweahter, who landed his jab early. He also landed nice with his left, to both body and head. Berto seemed reluctant, and sort of tight. They clinched and Mayweather landed nice to the body. They clinch again later and when they break, Mayweather is able to land a big left hook.

In the second round, it was still all Mayweather. He sort of just dance around, throwing jabs out. Berto really couldn’t do anything. He at one point landed a few jabs that brought noise from the crowd, but still, it was Mayweather’s round.

Third round was some of the same. Berto backed Mayweather to the ropes but couldn’t land anything. Mayweather just moved around, popping his jabs out.

It wasn’t until round four that Berto actually landed a nice punch, trapping Mayweather on the ropes and hitting him with a straight left. Mayweather circled away. They clinch and Mayweather lands a big right hand. Berto comes forward but misses with everything. They both initiate clinches before the round ends. So far, it’s Mayweather every round.

Berto’s corner tells him to get more aggressive. He does. He comes out and lands a nice right hand. Again Berto gets him on the ropes and tries to tee of, but doesn’t land anything clean. Some more moving and dancing from Mayweather.

Jump to the 11th round, cause we saw the same in all the previous. Mayweather is really just putting on a show. He’s dancing around barely even throwing punches at this point. Whatever you expected from this fight, that’s about how it went.

In the final round, possibly of Mayweather’s career, he basically just walked out there and did what he does. He jumped and glided around the ring ducking punches and occasionally clinching up. Berto kept getting him on the ropes, but still, couldn’t land anything.

Mayweather landed a massive uppercut that looked like it might have hurt Berto. Then he lands another one. The crowd starts going nuts, hoping Mayweather could get the finish. He didn’t. Try to imagine a fighter just sort of going through the motions and coasting, that’s what Mayweather did. But hey, what are you going going do. The fight ends.

Mayweather falls to his knees.