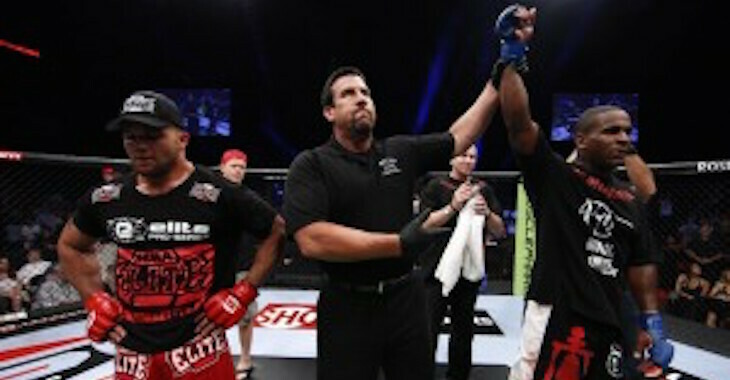 Just over three years ago today, Lorenz Larkin (16-4 MMA) was standing in the middle of the Strikeforce cage having his hand raised by referee John McCarthy after earning a unanimous decision victory over Robbie Lawler.

At the time (July 2012), the undefeated Larkin was considered to be one of the middleweight divisions rising stars, while Robbie Lawler was thought to be on the downside of his career.

What a difference three years can make.

Lawler’s loss to Larkin prompted “Ruthless” to move down a weight class from middleweight (185lbs) to welterweight (170lbs).

Since making the drop, Lawler has put together a 7-1 record and captured the UFC’s coveted welterweight title in the process.

Meanwhile, after defeating Lawler via unanimous decision in his final Strikeforce bout, Larkin went on a 1-4 run in the UFC’s middleweight division.

Following his unanimous decision loss to Derek Brunson at UFC 177 in August of 2014, “The Monsoon” made the decision to follow in Lawler’s footsteps and drop down a weight class.

As was the case with Lawler, Larkin has found immediate success in the UFC’s welterweight division, going 2-0 with both victories coming via technical knockout.

Lorenz Larkin recently sat down with BJPENN.com’s Chris Taylor to discuss a number of topics including his recent success at welterweight and a potential rematch with Robbie Lawler. Here is their conversation:

Taylor: You have earned back-to-back TKO victories since making the drop to the UFC’s stacked welterweight division. Who would you like to fight next at 170-pounds?

Larkin: Man that’s a hard question to answer because to me it really doesn’t matter who they put in front of me next. I’m going to fight either way, so as long as it is an exciting fight for me and the fans, then I am down with it.

Taylor: Speaking of exciting fights, you have received performance bonuses in each of your past two fights. Did you do anything special with the extra earnings?

Larkin: I paid my taxes haha.

Taylor: Damn taxes. So you and current UFC welterweight champion “Ruthless” Robbie Lawler have a history, having fought back under the Strikeforce banner in 2012 at middleweight. You won that fight via unanimous decision. Can you talk about Robbie’s success since that fight and if it had anything to do with your decision to drop down to 170-pounds. And is a rematch with Lawler something you would like in the future?

Larkin: I’m probably one of the happiest people for Robbie Lawler right now. It’s cool how he has been able to turn his career around at welterweight and how I am starting to do the same. Lawler’s on top right now and for anybody to do that to Rory MacDonald, you know he’s a beast! I’m just going to keep doing what I do and keep fighting whoever they put in front of me. If he (Lawler) still has the belt after a couple more wins, then you know it would be a great fight and a good storyline. So yea, if it works out in the future that we can do a rematch, it has all the ingredients for a great fight.

Taylor: Reports have been spreading that Carlos Condit will be the next man to challenge Lawler for the UFC welterweight title. What do you think of that fight and should Condit have got the nod over Hendricks or Woodley?

Larkin: That’s not a bad matchup. I think Condit deserves it just as much as the other guys. I expect it to be a war.

Who would you like to see Larkin fight next at 170-pounds and would you be excited to see a rematch between “The Monsoon” and “Ruthless” down the road? Sound off Penn Nation!