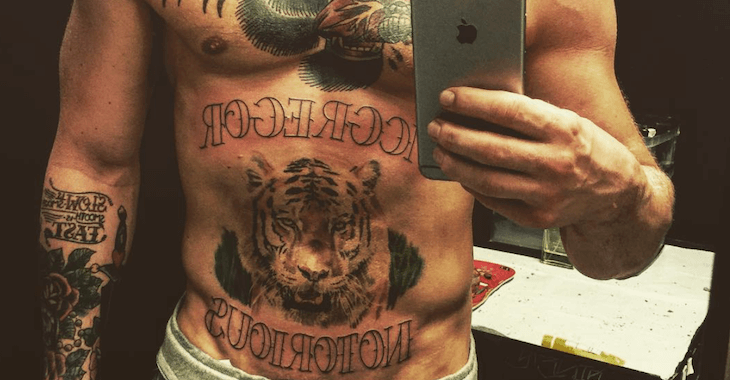 UFC interim featherweight champion Conor McGregor makes news for almost anything he does, especially when he gets new ink.

The fighter’s last few tattoos have brought a lot of discussion from fans, regarding the choice of image and location (tiger face on his stomach).

Tattoos are a very personal and permanent choice, so who’s to tell the guy what he should and shouldn’t get on his body? Well, maybe his coach John Kavanagh.

After his most recent tattoo choice, his name ‘McGregor’ and nickname ‘Notorious,’ above and below the tiger, his coach took to twitter to poke some fun at his fighter. He sent out a tweet saying that the Irishmen was banned from getting any more tattoos because he kept making all their new banners look outdated.

Obviously he’s joking, we think, but we do know that UFC president Dana White is not a fan of the artwork, according to McGregor himself.

Do you think the UFC would ever try to tell him he can’t get anymore?

You're banned from getting more ink @TheNotoriousMMA ur making the new sign look old already 😅 pic.twitter.com/tLcojhaqJB