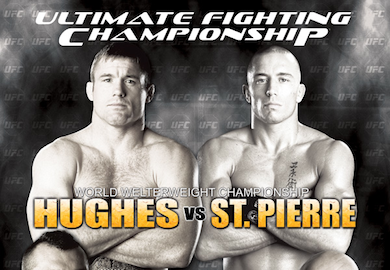 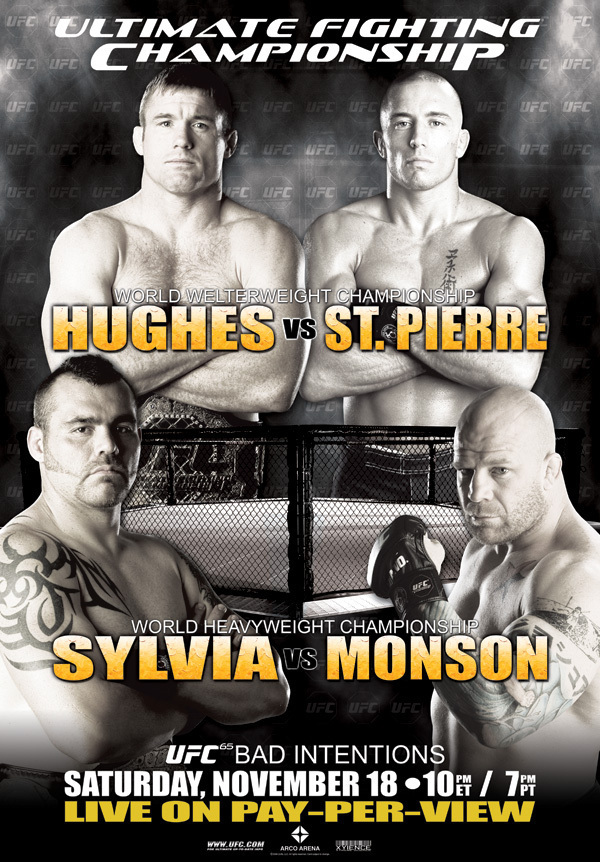 Join us as we travel 100 UFC “pay per view” events ago and revisit UFC 65: Bad Intentions!

Brandon Vera defeated Frank Mir by way of TKO, 1:09 into Round 1

In 2004, Frank Mir was forced to relinquish his UFC Heavyweight Championship after he was in a motorcycle accident that broke his femur and tore all the ligaments in his leg. While he was on the road to recovery, Brandon Vera had started to make a name for himself outside the UFC. He made his first PPV debut at UFC 57, which was coincidentally Mir’s first fight back in the octagon after his accident.

Walking into his fight with Mir, Vera was undefeated in the UFC. Vera had captured the imagination of the audience and some even touted him as “the next big thing” in the division. Mir, on the other hand, was struggling. He had lost his bout at UFC 57 by way of TKO and was unable to finish his next opponent, earning a unanimous decision. Mir was out to show he was still a force in the division, but Vera was proven to be quite a roadblock.

Not even thirty seconds into their fight, Vera cracked Mir with a straight right that wobbled him. Vera slammed his knee into Mir’s skull, which lifted him off the ground for a split second. Mir shot for a takedown, but was stuffed. Vera proceeded to tower over Mir while repeatedly connecting with punches while Mir laid there, turtled up. It was only a matter of time before the referee stepped in and separated them, ending the fight.

After Frank Mir was forced to vacate his championship, Arlovski defeated Sylvia to win the UFC Interim Heavyweight Championship. Sylvia eventually won a series of fights to earn himself a rematch against Arlovski (who was promoted to the Undisputed UFC Heavyweight Champion after just one defense). Sylvia knocked out Arlovski in the first round to win the title, and won a decision in their third and final match.

Sylvia’s next defense was an uneventful one against Jeff Monson at UFC 65. As a matter of fact, the bout was so uneventful that Zuffa granted Jeff Monson his request to be released right after he fought for their championship. Sylvia would go on to lose his UFC Heavyweight Title against Randy Couture at UFC 68.

Needless to say, this is where it all started for Georges St. Pierre.

Oddly enough this was not the first time these two men fought for the UFC Welterweight Title. St. Pierre and Hughes were the chosen ones to fight for the UFC Welterweight Title when it was vacated back in 2004. Georges St. Pierre was a young prospect that showed great potential, but Matt Hughes was a veteran that knew every inch of that octagon and how to use it. Hughes made quick work of St. Pierre, submitting him in the first round with an armbar.

The loss led St. Pierre to hone his craft outside the UFC for a very short time before making his return to the octagon. His return bout against Jason Miller was a great platform for GSP to show officials and fans alike how much he had improved as a fighter. St. Pierre went on to defeat a who’s who in the UFC, becoming the first man to stop Sean Sherk in the process.

In the meantime, Matt Hughes was busy making history becoming the most dominant UFC Welterweight Champion in history of the sport. After UFC 50, he went on a streak of his own that included wins over Frank Trigg and legend Royce Gracie. His last title defense before his rematch with Georges St. Pierre was against BJ Penn.

Hughes had fallen victim to BJ’s elite ground game years ago when he was defeated by “The Prodigy” at UFC 46 in 2004. BJ Penn earned his spot as #1 Contender to Hughes’ belt when St. Pierre was forced to pull out of UFC 63 due to an injury. Hughes was able to successfully defend his title for a record seventh time, knocking Penn out in the third round. (With one win a piece, Penn would later win the third match at UFC 123 via. KO.)

The stage had been set, and the only championship fight that made sense was Matt Hughes vs. Georges St. Pierre. Except this time, it was Hughes who was not prepared for St. Pierre’s storm.

To be the champion, you have to beat the champion and it was clear that that was St. Pierre’s intentions from the very first round. Towards the end of round one, St. Pierre sent Hughes tumbling to the mat after a swift combination but Hughes was able to hold out and survive the round. Many in attendance didn’t put it past Hughes to recover and come back stronger than when he was fresh at the beginning of the fight; he had done the same against Frank Trigg months earlier.

At the start of the second round, it was obvious that Hughes was still on Queer Street. St. Pierre easily stuffed takedown attempts and was picking him apart with strikes. Hughes ate a HUGE left high kick and St. Pierre smelled blood. “Rush” quickly followed him to the ground and let out a barrage of strikes that left Hughes’ hands bouncing in the air. Big John saw Hughes eating multiple elbows and proceeded to peel St. Pierre off of the former champion; Hughes has been dethroned.