It has been over six months since we last saw Nate Diaz compete in the Octagon.

The Stockton scrapper’s last two fights were the biggest fights of his career with the rivalry against Conor McGregor and many were thinking that Diaz has been waiting for the trilogy bout with “The Notorious.” 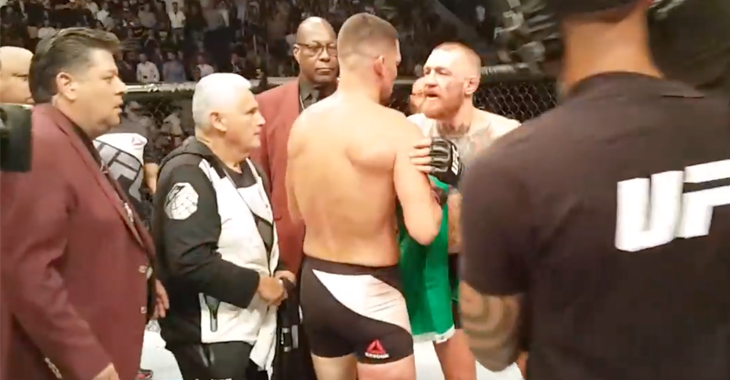 In a recent video interview that took place in Oakland at boxing coach Virgil Hunter’s gym, Diaz gave an update on where his mindset is at for competing again.

“Yeah, so they said I was waiting for Conor McGregor but I wasn’t waiting for Conor McGregor,” Diaz said (at 1:40 of the video). “I already beat him twice, so I was just training and saying if I was gonna fight again anytime soon, it was gonna be a big deal fight. Not a money fight, because I get paid regardless. Everybody saying I’m sitting out and waiting but now they’re talking all this Mayweather-McGregor stuff and I tried to get my boxing license years ago with some boxing promoters trying to buy my contract from the UFC and the UFC was not letting me go. But, now they’re talking all this McGregor-Mayweather stuff, I don’t know how real or fake it is, but it sounds like it could, who knows? Money talks. So all I know is I’m the only one with the credentials to fight both of those guys. They claim they’re the best in the world. Mayweather has been for years at boxing and McGregor, I just beat him twice and everybody forgets that. So, I got winner, straight up. I’m in the right place to be doing it with all the best boxers in the world.”

What sport and opponent would you like to see Nate Diaz compete against next? Let’s hear it in the comment section!