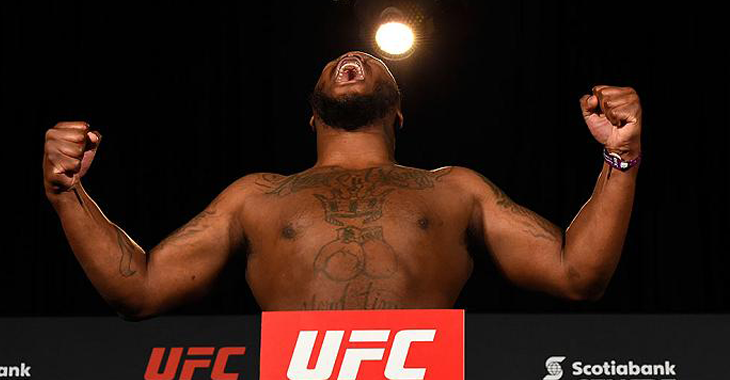 Derrick Lewis made his triumphant return at UFC Austin with a late knockout of Marcin Tybura. After a delayed fourth round celebration with his wife, he went right back on the warpath trying to fight the who’s who of the heavyweight division. He’s been eyeing Francis Ngannou, but he’s just one of many. He’s even willing to welcome Brock Lesnar back to the UFC, regardless of USADA testing or not.

“Yeah hopefully we can get something done this year, man. Hopefully we can get something before [Francis Ngannou] turns 50 on us. Usually after every fight, I tell them I would like to fight this guy. I always try to pick out the toughest guys that’s out there. […] I told them Francis, I told them [Alistair] Overeem, even a rematch with Mark [Hunt]. Who’s the other guy, [Curtis] Blaydes and Fabricio [Werdum]. Yeah, [the winner of Blaydes and Overeem]. I’d like to fight in May or June.”

“Me, I couldn’t do [WWE] because I’d be laughing my ass off. I couldn’t keep a straight face pretending like I’m hurt, this and that. I couldn’t do it. Hell no, [I wouldn’t wrestle Brock Lesnar] not in no WWE, no. I wouldn’t be able to hold back. I’d want to throw him a real punch. […] Yeah, [I’d fight him in the UFC]. If the money is right, I’ll fight anybody. I’d still fight [Lesnar] even now. I don’t care about [USADA testing]. I was fighting guys that were on the juice before USADA even came along, so I already knew most of these guys that were fighting in my younger career that they was on the juice and I didn’t care. So, it doesn’t matter to me.” — Derrick Lewis speaking on the Slip n’ Dip podcast.

The Black Beast is a man that knows what he’s doing. He’s currently tied – yes, tied – at six in the ranking with Mark Hunt, who is the last man to beat him. Blaydes, Werdum, Overeem and Ngannou are head of him in that order. The most likely scenario seems like Derrick Lewis getting the winner of the slated match-up between Overeem and Blaydes, but we’ll just have to wait and find out while Lewis heals up.