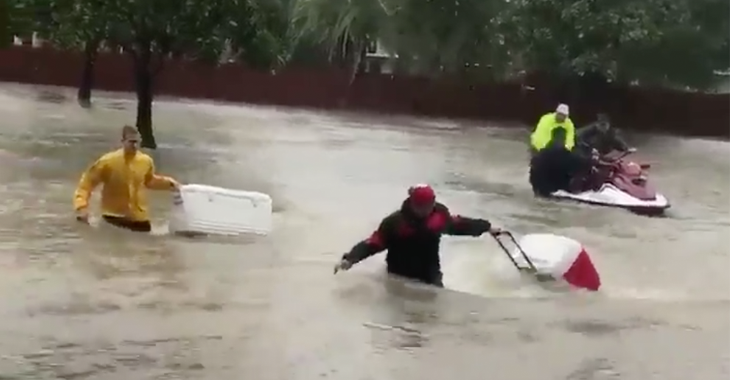 Hurricane Harvey has devastated hundreds of thousands of people in Texas and has sadly claimed a few lives in the wake of the natural disaster.

Houston UFC heavyweight Derrick Lewis has been helping out members from his community that have been in need as flooding in his area continues.

Lewis told MMA Junkie that he even helped a man who felt the need to bring his Confederate flag with him, which has its known association with racism.

“I picked up one guy and his family, his wife – he just kept apologizing to me, because all he really had was his clothes, and he wanted to take his Confederate flag,” Lewis said. “He wanted to take that with him, and he just apologized and said, ‘Man, I’ll sit in the back of your truck, man. I don’t want to have my flag inside of your truck like this.’ I said, ‘Man, I’m not worried about that.’

“He’s saying, ‘You never know if you ever need someone, so …’ – I already knew where he was going with it. I just said, ‘Don’t even worry about it. It’s OK. I don’t care about that.’ His wife kept hitting him and saying, ‘You should have just left it.’”

Lewis said that it’s not something he hasn’t seen before and was just focused on helping out those in need.

Lewis posted a few videos to social media where people are seen walking through areas flooded up to their waists and getting some children likely to safety centers in a large lifted pickup truck.

The kids are good 👍🏿 pic.twitter.com/SNXENDo4z3

A bigger one is on the way behind my house #tornado pic.twitter.com/1uhjJSXfTR

Houston Public Media described the following as the scene in Houston.

“On Sunday, incessant rain covered much of Houston in turbid, gray-green water and turned streets into rivers navigable only by boat. In a rescue effort that recalled the aftermath of Hurricane Katrina, helicopters landed near flooded freeways, airboats buzzed across submerged neighborhoods and high-water vehicles plowed through water-logged intersections. Some people managed with kayaks or canoes or swam.

“Volunteers joined emergency teams in pulling people from their homes or from the water. The flooding was so widespread that authorities had trouble pinpointing the worst areas. They urged people to get on top of their houses to avoid becoming trapped in attics and to wave sheets or towels to draw attention to their location.”

The rain continues to pour down in Texas as the National Weather Service still has flash flood warnings issued for parts of Texas.

The National Weather Service also tweeted a map of the amount of rainfall.

NWS: Updated rainfall totals from the past 4 days show widespread areas greater than 10″ with a large swath over 30″

Derrick Lewis is scheduled to fight Fabricio Werdum at UFC 216 on October 7 at the T-Mobile Arena in Las Vegas, Nevada.