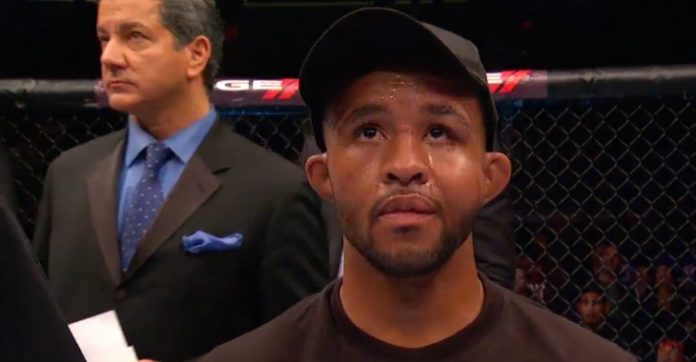 .@MightyMouseUFC offering up some kind words of motivation to @FrankieEdgar while looking back on his own loss to @DominickCruz. #UFC222 pic.twitter.com/BAmo8y2Dvb

We are now living in a post-finished Frankie Edgar world. Since 2005, the former UFC lightweight champion has only lost six times. None of those losses were by finish, until that sixth one. On short notice, Brian Ortega stepped up at UFC 222 and did the unthinkable by knocking Edgar out. A seemingly unbeatable Demetrious Johnson recently offered up some kind and motivational words to Frankie Edgar, while reflecting back on his last loss.

“Everybody gets they ass whooped. That’s when you know. Man, look at me. F-ck, I loss and Matt [Humes] is like, ‘It’s all good, dude. It’s all good.’ But at the end of the day, it’s about keep pushing forward, keep doing better, and take care of your family. That’s all that matters in may book. You can get beat up your whole entire life, as long as you’re being a good person, paying your bills, and you have money for your retirement, nothing matters.”

Saturday did not go as planned, congrats to Ortega he definitely got me with some good ones. Thanks to all my peers, my team, my friends, and my fans for their nice words, they don’t go unnoticed. All I can do now is dust myself off and get ready to put it all on the line again.

“Nothing matters. All this right here, all this, this sadness, I took all that and I said, ‘You know what? Everyone gets they ass whooped. It’s all good, baby. It’s all good.’ You go home, you recollect yourself and you keep on doing so they next time you fight you look like this. So, keep your head up, Frankie [Edgar]. You’ll be back, brother. You will be back.” — Demetrious Johnson speaking live on his Twitch stream.

Six years ago before the 13-fight win streak and breaking Anderson Silva’s title defense record, UFC’s flyweight king Demetrious Johnson was a bantamweight on a nice little streak who ended up getting outclassed by Dominick Cruz. It obviously lit a fire underneath the fighter because he hasn’t lost since. Humbly reviewing his loss and even laughing at what Cruz did to his face, Johnson’s message to Frankie Edgar was all class from one great champion to another.