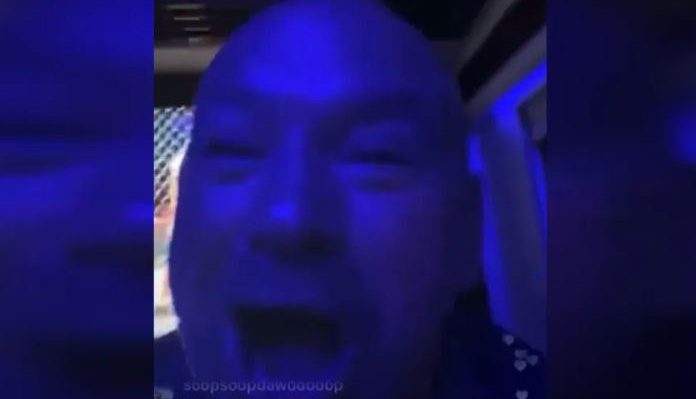 Like many fight fans, Dana White was losing his mind during last night’s UFC 275 main event between Jiri Prochazka and Glover Teixeira.

Teixeira (33-8 MMA) was looking to earn his first career title defense when he squared off with Prochazka (29-3-1 MMA) yesterday in Singapore. The 42-year-old had captured the promotions light heavyweight title back at UFC 267 with a second round submission victory over Jan Blachowicz.

Meanwhile, Jiri Procházka (29-3-1 MMA) was returning to action for the first time since May of 2021, where he earned a stunning knockout victory over Dominick Reyes (see that here). The brutal stoppage had marked the Czech’s twelfth win in a row and tenth consecutive finish.

While Dana White was not in attendance for UFC 275, he did tune in to watch the main event from his son’s 21st birthday celebration in Miami.

Saturday’s headliner resulted in what many fans and analysts are calling the “fight of the year”. Glover Teixeira and Jiri Procházka went to absolute war for the better part of twenty-five minutes at Singapore Indoor Stadium. Teixeira found most of his success on the ground but also rocked Prochazka on multiple occasions in the standup. Not to be outdone, Jiri also landed a number of hard combinations on the Brazilian veteran. After four rounds of action it appeared that Glover Teixeira was just five minutes away from hearing “and STILL.” However, despite having dominant positions in the final five minutes, Teixeira eventually gave up his back and Jiri forced him to tap with a choke in the final seconds.

It was a wild finish and one the spurred quite the reaction from Dana White.

Check out the footage below courtesy of Chamatkar Sandhu of BTSport.

"What a f—ing fight!" – Dana White's reaction to Glover Teixeira vs. Jiri Prochazka 🤯 (via @danawhite) pic.twitter.com/rQRwj1FSOP

“He tapped!” White screamed in the Instagram live video. “No way! No f**king way! Jiri f**king tapped him out. No way. No way. What a f**king fight. What an absolute f**king war, man. Sh*t, my phone is f**king blowing up.”

Glover Teixeira has already requested an immediate rematch following last night’s stunning result. However, Dana White has yet to confirm what will be next for newly crowned UFC light heavyweight champion Jiri Prochazka.