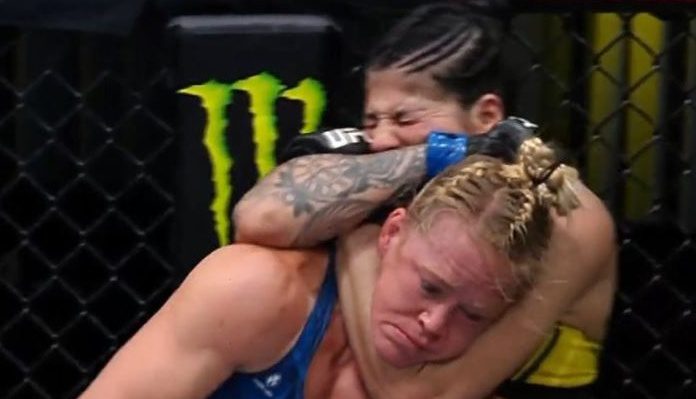 Holm (14-5 MMA), the UFC’s former bantamweight champion, will be returning to action for the first in over eighteen months this evening. ‘The Preachers Daughter’ currently boasts a two-fight winning steak, scoring decision wins over Raquel Pennington and Irene Aldana in her most recent efforts.

Meanwhile, Ketlen Vieira (12-2 MMA) most recently competed back in November of 2021, where she scored a unanimous decision win over former title holder Miesha Tate. The Brazilian standout has gone 6-2 since joining the UFC ranks in 2016.

Round one of the UFC Vegas 55 main event begins and Ketlen Vieira fires off a low kick. Holly Holm returns fire with one of her own. Another inside low kick lands for the Brazilian. The former champ goes to the body with a side kick. Vieira attempts to come over the top with a left hand. She pushes Holm against the cage. Holly reverses the position and lands a knee. She looks for a takedown but Vieira avoids and almost sweeps her. Back against the cage now and Holm work some knees to the thigh. Ketlen looks for a whizzer kick but Holm avoids losing the position. More knees to the thigh from Holm. She follows the up with some short left hands. She is using her head to keep Vieira pinned in this position. It isn’t the most fan-friendly style, but it is effective. The horn sounds to end round one.

To the second round we go! #UFCVegas55 pic.twitter.com/vNrd8vf9Gs

Round two of the UFC Vegas 55 main event begins and Ketlen Vieira charges forward with a combination. Holly Holm lands a nice low kick and then another. Vieira answers with one of her own. The fighters clinch up and Vieira lands a beautiful judo throw and lands in half guard. Holm immediately begins scooting towards the fence. She gets there and begins to work her way back up to the feet. She does and quickly separates to create some distance. Holly Holm circles to her right and then shoots in for a takedown. Vieira is doing a good job of defending but Holm has her pressed against the cage. Ketlen reverses the position and locks up a choke in the process. This looks tight. Holly is turning blue but is able to escape at the last second. She pushes Vieira back against the cage. The horn sounds to end round two.

Round three of the UFC Vegas 55 co-main event begins and Ketlen Vieira lands a heavy inside low kick. Holly Holm blitzes with a flurry of punches. Vieira attempts to counter with a high kick but misses and is quickly pressed up against the cage. ‘The Preachers Daughter’ begins working some knees to the thigh from the clinch. Vieira is able to break free from the position and circle out. Holm catches he with a low kick and then a side kick. The former champ with a nice combination. She goes upstairs with a high kick but Vieira blocks it. Ketlen with a left hand up the middle. Holly Holm forces the clinch and pushes her opponent back up against the fence. Great use of head position here form Holm. Ketlen lands a good knee up the middle. She breaks free from the clinch and comes forward with a flurry. A nice right hand appears to stun Holm. Back to the clinch to close out round three.

Round four proved to be close but Holly Holm appeared to come up big in the final five minutes. After twenty five minutes of action we went to the judges scorecards for decision.

Who would you like to see Vieira fight next following her split decision victory over Holm this evening in Las Vegas? Share your thoughts in the comments.