The main event went the full twenty-five minutes. Tate was able to get off some decent punches in the fight, but it was the jab and volume of Vieira that ultimately proved to be the difference maker. After five rounds of hard fought action, the Brazilian was awarded a much-deserved unanimous decision victory from the judges in attendance.

In the co-main event of UFC Vegas 43, welterweight fighters Michael Chiesa and Sean Brady squared off in hopes of moving up the promotional rankings. The bout proved to be a grueling three round affair. Sean Brady was able to utilize his wrestling skills to seemingly get the better of Michael Chiesa in rounds one and two. However, ‘Maverick’ would storm back with a big round three leaving the result in the hands of the judges. After fifteen minutes of action, Brady was awarded the unanimous decision win.

Following the conclusion of today’s event, UFC officials announced at the post-fight press conference that three fighters would be taking home performance bonuses. 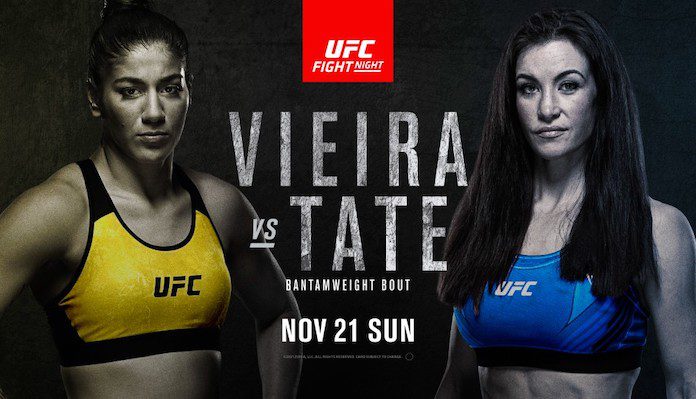 Fight of the night: Bantamweight fighters Adrian Yanez and Davey Grant each pocketed an extra $50k for their thrilling war in today’s UFC Vegas 43 main card opener. Yanez wound up winning the contest by split decision.

Performance of the night:  Taila Santos earned an extra $50k for her impressive first round victory over Joanne Wood (formerly Joanne Calderwood). After dropping her Scottish opponent on two occasions, Santos promptly finished the fight with a rear-naked choke.

Are you surprised by any of the fight night bonuses handed out by Dana White and company following the conclusion of today’s UFC Vegas 43 event? Share your thoughts in the comment section PENN Nation!