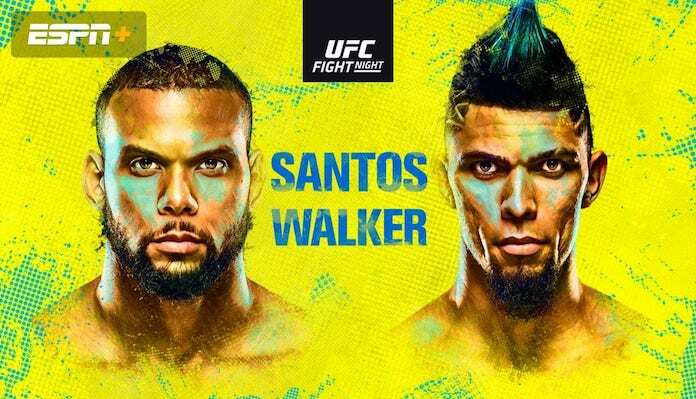 Santos (21-9 MMA) will enter tonight’s contest in hopes of snapping a three-fight losing skid. The former light heavyweight title challenger suffered a unanimous decision loss to Aleksandar Rakic in his most recent effort at UFC 259.

Meanwhile, Johnny Walker (18-5 MMA) will be returning from a year long hiatus this evening at UFC Vegas 38. The Brazilian last competed at UFC Vegas 11, where he earned a first-round knockout victory over Ryan Spann. That win had snapped a two-fight losing skid for Walker, who had previously suffered losses to Corey Anderson and Nikita Krylov.

UFC Vegas 38 is co-headlined by a middleweight matchup featuring Kevin Holland squaring off with Kyle Daukaus.

Holland (21-7 MMA) will be looking to snap a two-fight losing skid this evening. ‘Big Mouth’ is coming off of back-to-back unanimous decision losses to Derek Brunson and Marvin Vettori in his most recent efforts.

Meanwhile, Kyle Daukaus (10-2 MMA) most recently competed back in May, where he suffered a unanimous decision loss to Phil Hawes. Prior to that setback, the Philadelphia native had earned a win over Dustin Stolzfus at UFC 255.

Get all of tonight’s ‘Santos vs. Walker’ live results and highlights below (refresh for updates):

Alexander Hernandez vs Mike Breeden – Hernandez def. Breeden via KO (punch) at 1:20 of Round 1

Antonina Shevchenko vs Casey O’Neill – O’Neill def. Shevchenko via TKO (strikes) at 4:47 of Round 2

[ Tune in LIVE on @ESPNPlus ] pic.twitter.com/oqrPRg1e7Y

Devonte Smith vs Jamie Mullarkey – Mullarkey def. Smith via TKO at 2:51 of Round 2

What a comeback by @Jamie_Mullarkey 🇦🇺

Stephanie Egger vs Shanna Young – Egger def. Young via TKO (punches) at 2:22 of Round 2

The GnP from Stephanie Egger seals the victory.

Turned the tables on 'em! 🔄

Who are you picking to win tonight’s UFC Vegas 38 main event between Thiago Santos and Johnny Walker? Share your predictions in the comment section PENN Nation!