The Octagon returns to Texas for tonight’s UFC 277 event, a thirteen-bout fight card headlined by Julianna Pena vs. Amanda Nunes 2.

Pena (11-4 MMA) and Nunes (21-5 MMA) originally collided at last December’s at UFC 269 event, where ‘The Venezuelan Vixen’ scored one of the biggest upsets in MMA history dethroning ‘The Lioness’ with a second round submission victory.

That setback served as Amanda Nunes’ first loss since 2014 and snapped her incredible twelve-fight winning streak.

Meanwhile, Julianna Pena will enter tonight’s headliner sporting a two-fight winning streak. Prior to her shocking upset over Nunes last winter, Pena was coming off a third round knockout victory over Sara McMann.

UFC 277 is co-headlined by a rematch between Brandon Moreno and Kai Kara-France for the promotions interim flyweight world title. 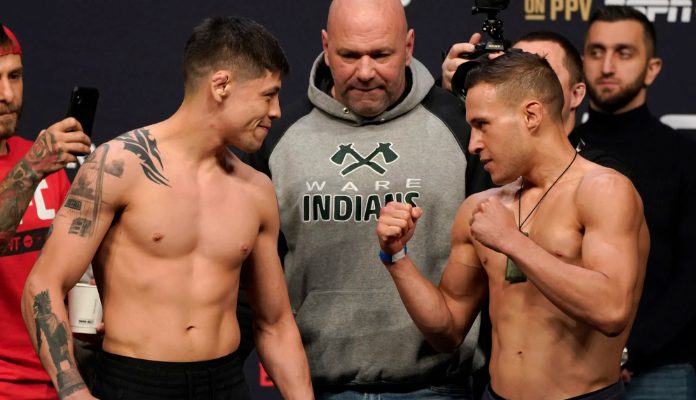 Moreno (19-6-2 MMA) will enter the contest looking to rebound, this after surrendering the flyweight championship to Deiveson Figueiredo in his most recent effort at UFC 270. Prior to that setback, ‘The Assassin Baby’ had put together a seven-fight unbeaten going 5-0-2.

Meanwhile, Kai Kara-France (24-9 MMA) enters UFC 277 boasting a three-fight winning streak, his latest being a decision win over Askar Askarov. The Kiwi had previously collided with Moreno at UFC 245 in December of 2019, dropping a unanimous decision.

Pavlovich (15-1 MMA) will enter the contest on a three-fight winning streak, with all three wins coming by way of first round TKO. In his most recent effort this past March, the Russian defeated Shamil Abdurakhimov.

As for Derrick Lewis (26-9 MMA), ‘The Black Beast’ will be looking to rebound when he takes to the Octagon this evening. Lewis is coming off a knockout loss to Tai Tuivasa in his most recent effort this past February.

MORENO IS A CHAMP ONCE AGAIN 🏆 #UFC277 pic.twitter.com/SPGZ2lRLH1

Sergei Pavlovich vs. Derrick Lewis – Pavlovich def. Lewis via TKO at 0:55 of Round 1

Alexandre Pantoja vs. Alex Perez – Pantoja def. Perez via submission (rear-naked choke) at 1:31 of Round 1

Pantoja vs Perez was a crazy few minutes 😂😂😂 congratulations Pantoja on the W #UFC277 pic.twitter.com/9UKPGjbPy1

Magomed Ankalaev vs. Anthony Smith – Ankalaev def. Smith via TKO (punches) at 3:09 of Round 2

Michael Morales vs. Adam Fugitt – Morales def. Fugitt via TKO at 1:09 of Round 3

Who are you picking to win tonight’s UFC 277 main event rematch between Julianna Pena and Amanda Nunes? Share your predictions in the comment section PENN Nation!