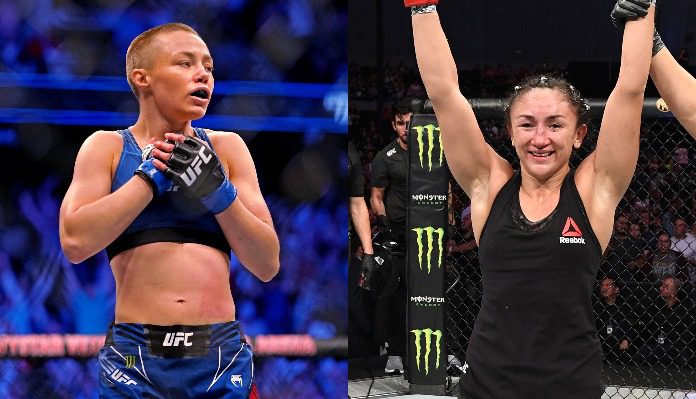 In the co-main event of UFC 274 Rose Namajunas is looking to defend her strawweight title as she rematches Carla Esparza after seven-and-a-half years. Heading into the fight, Namajunas is a -220 favorite on FanDuel while the challenger is a +176 underdog.

Ahead of the fight, BJPENN.com reached out to pro fighters to get their prediction for the scrap. The pros are unanimous in thinking Namajunas defends her belt again and does so by late TKO or decision.

Chase Hooper, UFC featherweight: I have to go with Rose, she is just on another level and is a step ahead of everyone else.

Vicente Luque, UFC welterweight: I have to go with Rose Namajunas, she looks like she’s on another level and she will prove how much better she got here.

Grant Dawson, UFC lightweight: It’s so hard to bet against Namajunas right now. She has beaten all the former champs except for Esparza which I think she does here.

Eryk Anders, UFC middleweight: Rose Namajunas is too far ahead of everyone. Weili did take her down and Carla Esparza is a much better wrestler than Weili which could pose some problems for Rose. But, Rose moves well and I don’t think it will be easy to get her down.

Joe Lauzon, UFC lightweight: Rose, she just looks too good right now and she’ll keep it standing and is the much better striker.

Drakkar Klose, UFC lightweight: Rose, she’s too good and too technical and will outstrike Esparza.

Fernie Garcia, UFC bantamweight: Namajunas by decision, her striking is too crisp for Esparza.

Brandon Jenkins, UFC lightweight: Rose Namajunas, I don’t think anyone takes the belt from her for a while she looks too good right now.