Tonight’s “Legends 2” event was originally slated to take place at the Staples Center in Los Angeles, California. However, the fight card was moved after headliner Oscar De La Hoya was forced out due to illness, and Evander Holyfield was booked as the short-notice replacement for Vitor Belfort. California would not sanction the Holyfield vs Belfort fight to take place in its state and which resulted in the event being moved to Florida.

Evander Holyfield, who is now 58-years-old, has not competed since 2011 where he scored a TKO victory over Brian Nielsen. He is currently 44-10-2 as a professional and is the only four-time world heavyweight champion.

Meanwhile, Vitor Belfort (26-14 MMA, 1-0 Boxing) will be returning to combat sports for the first time since UFC 224 in 2018. That evening in Brazil, ‘The Phenom’ wound up suffering a knockout loss to fellow countrymen Lyoto Machida. That setback was preceded by a unanimous decision victory over Nate Marquardt in 2017. 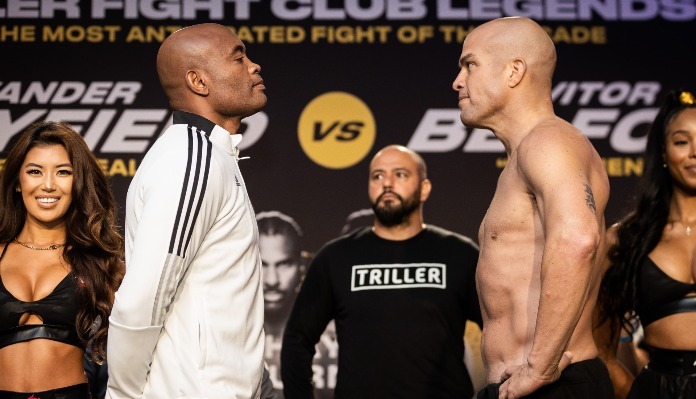 Tonight’s Triller Fight Club: ‘Holyfield vs Belfort’ event is co-headlined by a boxing match between former UFC champions Tito Ortiz and Anderson Silva. ‘The Huntington Beach Bad Boy’ missed weight by five pounds and was forced to forfeit 20% of his purse to ‘The Spider’.

Tito Ortiz last competed in combat sports in December of 2019, scoring a submission victory over Alberto El Patron in a MMA bout. The win marked Tito’s third in a row, as he had scored previous first-round finishes over Chuck Liddell and Chael Sonnen.

Get all of tonight’s Triller Fight Club: ‘Holyfield vs Belfort’ results and highlights below (main card begins at 7pm EST, refresh for updates):

Heavyweight bout: Evander Holyfield vs. Vitor Belfort – Belfort def. Holyfield via TKO at 1:49 of Round 1

Catchweight bout: Anderson Silva vs. Tito Ortiz – Silva def. Ortiz via KO at 1:21 of Round 1

These two are trading shots!#TRILLERFIGHTCLUB LIVE RIGHT NOW ON #FITE!

Did you rule that a slip or a knockdown?

Who are you picking to win tonight’s Triller Fight Club: ‘Holyfield vs Belfort’ contests? Share your predictions in the comment section PENN Nation!