T.J. Dillashaw is explaining why he feels Aljamain Sterling is still ‘the most beatable champion’.

Following the loss, Dillashaw revealed at the post fight press conference that he had been suffering with an injured shoulder for weeks prior to the championship bout.

Speaking on ‘The MMA Hour’, Dillashaw explained why he gambled and took the fight with Sterling while injured (h/t MMAJunkie):

“I took a gamble, as well, and that’s why it’s called f*cking gambling. You don’t know the situation. I took a gamble. I could have sat out and got surgery, but when I come back, who knows if I’m gonna get a title shot right away? Or I’m going to have to fight my way back up in it or how bad this shoulder is. Let’s be honest: This is my third surgery in my left shoulder. It’s not like I’m a spring f*cking chicken, and it’s going to be an easy fix. It’s a serious thing. I will be coming back. I’m not gonna let my story end that way.”

Continuing the 36-year-old went on to explain that Sterling is very ‘beatable’:

“But it’s still in the back of your head: I go and get surgery, I’m out for a year. And I was just out on surgery. There’s no guarantee you get a title fight when you come back. There’s a lot of options I’m weighing out of me getting this fight against a guy that’s very beatable. I think he’s the most beatable champion right now in the division. People are gonna give me sh*t for that, but I think he’s got some big holes in his game, and I matched up well with him. So I’m going to roll them dice, and I’m going to bet on myself even with one arm.” 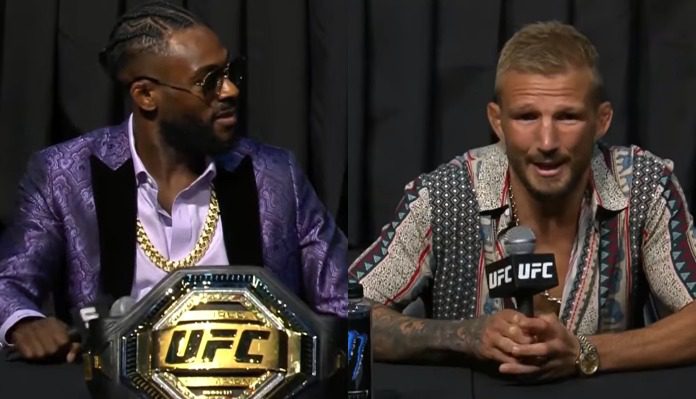 “I feel like he was gifted the belt to begin with, and then he squeaked by with a win (in the rematch against Petr Yan). He’s a great athlete, he’s on a great win streak, he’s gotten to the top, but I don’t think he’s the best champion we’ve got out there. I don’t think he’s the best in the division, especially in the division we have, and that was an opportunity I wasn’t going to let slip through my fingers even though it did. My opinion has not changed. … I think his teammate, Merab (Dvalishvili), beats him.”

Do you agree with TJ Dillashaw’s commentary that Aljamain Sterling is very beatable? Do you believe the Californian should have entered into the fight injured?

This article appeared first on BJPENN.COM
Previous articleRose Namajunas says she “got what she needed” out of Carla Esparza rematch: “I’m an artist and you don’t always have Mona Lisas”
Next articleMichael Bisping shares prediction for “The people’s main event” at UFC 281: “He has been shown to be a little bit chinny”
© Newspaper WordPress Theme by TagDiv