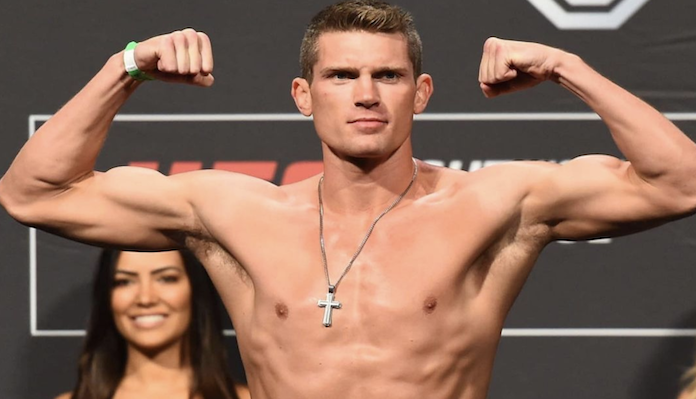 UFC welterweight contender Stephen Thompson explained why it would be a “bad idea” for Jake Paul to fight Tyron Woodley in a boxing match.

Thompson has fought Woodley twice in the UFC, the first time fighting to a majority draw and then losing a majority decision in the rematch, so he knows “The Chosen One” better than anyone. Recently, Woodley completed his UFC contract and he is now a free agent. One of the fights that have been bandied about for him by fans and media is a boxing match against Paul. At this point, we aren’t sure if this fight will end up happening, but based on their previous run-in, it seems as though Woodley and Paul are interested in it.

Speaking to James Lynch, Thompson was asked what his thoughts are on a potential Paul vs. Woodley boxing match. Despite the fact Woodley has lost his last four fights in the Octagon and was just finished by Vicente Luque in his last fight, Thompson is confident that it would be a rough night for Paul if they end up fighting in the boxing ring.

“I think it would be a bad idea for Jake. Tyron Woodley’s boxing is very good. He’s not having to worry about any takedowns or any kicks to the face or anything like that, he can just focus on boxing. Tyron’s got some power, boy. Tyron’s got some power. If Jake goes that route — which I don’t think he will — if he was smart, he would not want to box Tyron Woodley,” Thompson said.

With Woodley now a free agent, we will likely find out where his new home is in the coming weeks, and this fight with Paul seems like a possibility even if it’s a hard fight for Paul.

Do you agree with Stephen Thompson that a Tyron Woodley vs. Jake Paul boxing match would be a bad idea for Paul?