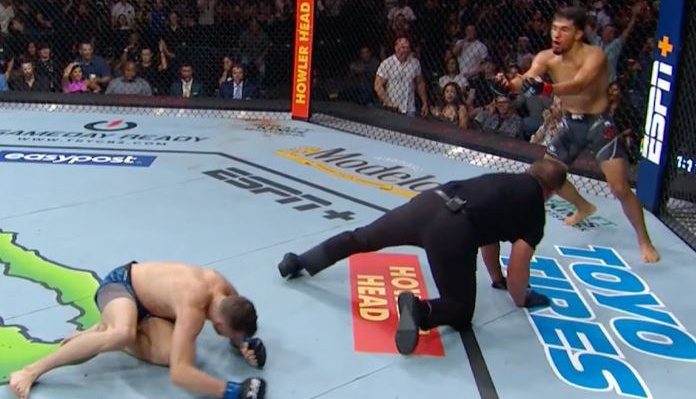 Kelley (8-3 MMA) had missed weight by one-and-a-half pounds (137.5) for the contest and was subsequently forced to forfeit twenty percent of his fight purse to Yanez. The 35-year-old had entered the bout on a two-fight winning streak, his latest being a TKO victory over Randy Costa.

Meanwhile, Adrian Yanez (16-3 MMA) entered tonight’s contest sporting an eight-fight winning streak, with four of those victories coming under the UFC banner. In his most previous Octagon appearance, the Texas native had scored a split decision win over Davey Grant.

Been circling this one for weeks! ⚡️

➡️ Let's see if @YanezMMA and @TonyKelleyMMA bring the heat!

Adding to the intrigue of tonight’s bantamweight affair was the fact that some Brazilian fighters had put a bounty on Kelley’s head. That of course spawned from Tony’s ‘Dirty Brazilian’ comments, which he made while working a recent Fight Night event. Fighters such as Gilbert Burns offered to add bonus money to Adrian Yanez’s fight purse if he could knockout Tony Kelley this evening.

Tonight’s ‘Yanez vs. Kelley’ fight resulted in a first round finish for the hometown Texan in Yanez. The 28-year-old showcased his terrific boxing skills on route to putting Kelley out with the spectacular finish. Check out the ending below:

FIRST ROUND FINISH IN HIS HOME STATE!!! 🔥🔥🔥 pic.twitter.com/mDEMNTyH0Y

Check out how the pros reacted to Yanez vs. Kelley below:

Let’s get it Yanez!!! #UFCAustin

YEOOO!!! That was FILTHY!!! My guy wants some more!!! Adrian Yanez is the real deal ladies and gents! Just incase you didn’t know that yet! #UFCAustin

That boy Yanez got some very nice hands!!!#UFCAustin

Life will show u middle finger back at ya sometimes

Adrian Yanez needs a number next to his name🔥🔥 @yanezmma

@yanezmma looking like a contender! Amazing combinations and aggression

Who would you like to see Adrian Yanez fight next following his KO victory over Tony Kelley this evening in Texas? Share your thoughts in the comment section PENN Nation!