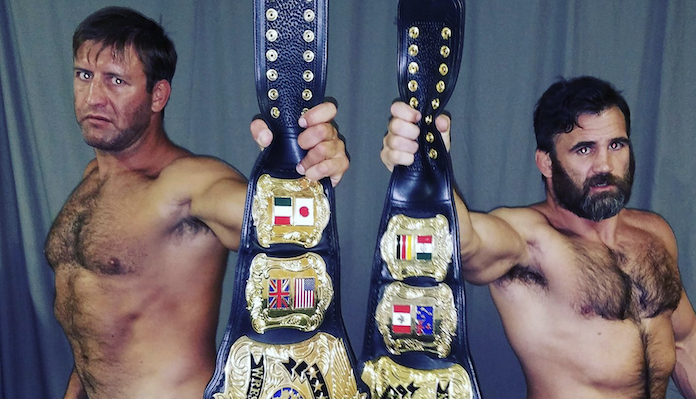 Bonnar was back in the news this week after he posted a video of himself getting kicked out of his gym on his 44th birthday for not wearing a mask. As the video of Bonnar at the gym started making the rounds, the video of Bonnar’s 2018 DUI arrest also started getting shared again. Bodycam footage of that incident revealed that Bonnar was allegedly drunk behind the wheel and driving recklessly when he was restrained by concerned citizens.

Taking to his social media in response to Bonnar’s name being back in the news, Baroni used it as an opportunity to take a shot at his once-wrestling tag-team partner. In a series of tweets, Baroni claimed that he slept with Bonnar’s wife and called him an alcoholic.

He’s an alcoholic piece of shit. That’s why I fucked his wife https://t.co/zke1Et1Zcj

His wife fucked it up https://t.co/GRC6MPz2T0

Bonnar and Phil Baroni actually did some professional wrestling a few years ago under the name “The Real Shooters” and they appeared to be in good spirits at one point. But there was a falling out between the two former friends and clearly, there is no love lost anymore.

Baroni (16-19) has not competed in mixed martial arts since September 2019, when he lost via submission to Sai Wang in China’s Rebel FC promotion. Now 44 years old, Baroni’s last win came in May 2018 in King of the Cage. He is best known for his two stints in the UFC, where he went 3-7 overall while fighting in the Octagon. His best win came over Dave Menne at UFC 39 in 2002 when he knocked him out with a brutal barrage of strikes.

Bonnar (15-9) was last seen in the cage in November 2014 when he lost a split decision to Tito Ortiz in Bellator. The 44-year-old Bonnar is most well known for his “Fight of the Decade” with Forrest Griffin at the TUF 1 Finale. He competed in the UFC and went 8-7 while competing in the Octagon between 2005 and 2012 before his eventual release.