Not long after Nate Diaz announced that an adverse United States Anti-Doping Agency test result had forced him out of his UFC 244 main event battle with Jorge Masvidal, Dustin Poirier took to social media to share his thoughts on the situation.

Poirier, who was briefly targeted to fight Diaz late last year, was fresh out of surgery. Despite his condition, he did not hold back.

“Talking all that sh*t about steroids,” Poirier said in a video posted to Twitter. “F*ck you, Nate.”

“You pulled out of my fight too,” Poirier added in a second Tweet. “You a b*tch. Fake ass gangster.”

Not long after Poirier made this comment, Nate’s brother Nick Diaz issued a scathing response in his Instagram story. Nate then shared this response in his own story, echoing his brother’s sentiment. 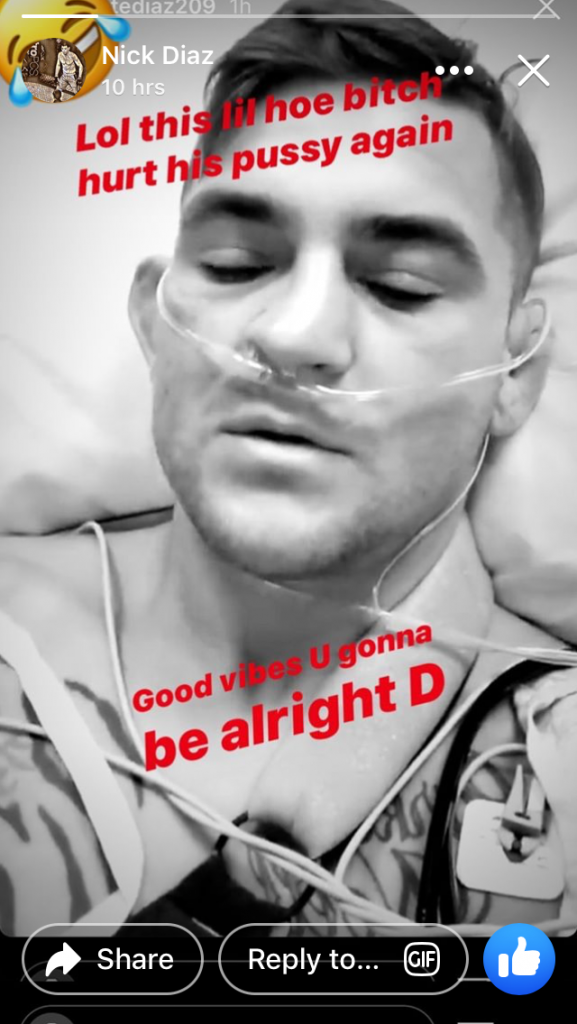 At this time, it’s not clear what the future holds for Nate Diaz and the UFC 244 main event. Here is how Diaz announced the issue himself.

Your all on steroids not me pic.twitter.com/ykrZmRIoPS

“I’m not gonna make it out to NYC for fight week next week because they say I tested with elevated levels that they say might be from some tainted supplements.” Diaz wrote in a statement. “I call false on that cause I only take Whole Food or natural food supplements. I don’t even eat meat!

“So until UFC, USADA or whoever is F**KING with me fixes it, I won’t be competing. I’m not gonna play their game and try and hide it or keep quiet, as they suggested. I’m not going to have my name tainted as a cheater like these other mothef**kers who keep quiet until after the fight so they can get paid. Fuck*ng cheaters.

“I don’t give a f*ck about some money over my dignity and my legacy.” Diaz concluded. “I’m not staying quiet and figuring it out after the fight. That’s cheating. So fight game, I’ll see you when I see you. The realest baddest mother f**ker in the game.”