Dana White has seemingly dismissed the notion that Islam Makhachev could leapfrog Michael Chandler or Justin Gaethje in the UFC contender line.

Makhachev (21-1 MMA) improved his current win streak to nine in a row at last weekend’s UFC 267 event, earning a dominant technical submission victory over Dan Hooker in the very first round.

That win served as the Russian’s third stoppage victory in a row and had many fight fans calling for him to get a title shot.

Dana White was asked if Islam Makhachev could leapfrog Michael Chandler and Justin Gaethje in the lightweight contender during Thursday’s UFC 268 press conference in New York.

“We don’t care what Islam [Makhachev] says,” Chandler answered for White (via MMAFighting). “Saturday night, me and Justin Gaethje get after it, we’re the No. 1 contender. It’s a No. 1 contender’s fight.” 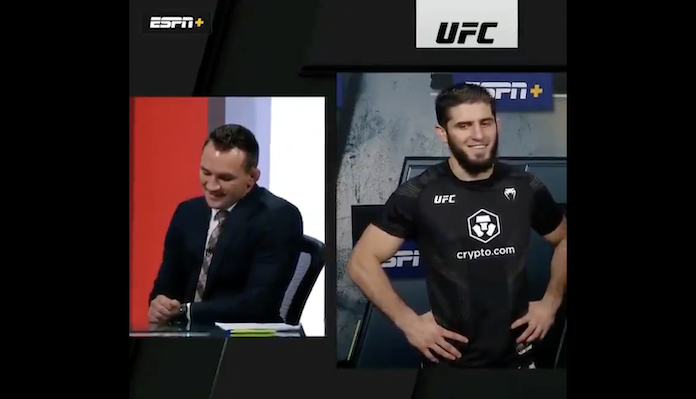 For his part, Dana White did not seem to dispute Chandler’s notion and followed up with the following sentiment.

Justin Gaethje (22-3 MMA), the promotions former interim lightweight champion, will be returning to action for the first time in twelve months on Saturday at MSG.

‘The Highlight’ last competed for Dana White and company in October of 2020, where he suffered a submission loss to lightweight great Khabib Nurmagomedov.

As for Islam Makhachev, it will be interesting to see who Dana White and UFC officials plan on matching the streaking Russian up against next.

Who do you want to see Makhachev face in his next Octagon appearance? Share your thoughts in the comment section PENN Nation!