Michael Bisping shares prediction for “The people’s main event” at UFC 281: “He has been shown to be a little bit chinny”

Michael Bisping is sharing his prediction for ‘The people’s main event’ between Michael Chandler and Dustin Poirier at UFC 281.

On the ticket, in a lightweight bout, Michael Chandler (23-7 MMA) will take on Dustin Poirier (28-7 MMA), each trying to make a claim for their shot at the lightweight title. 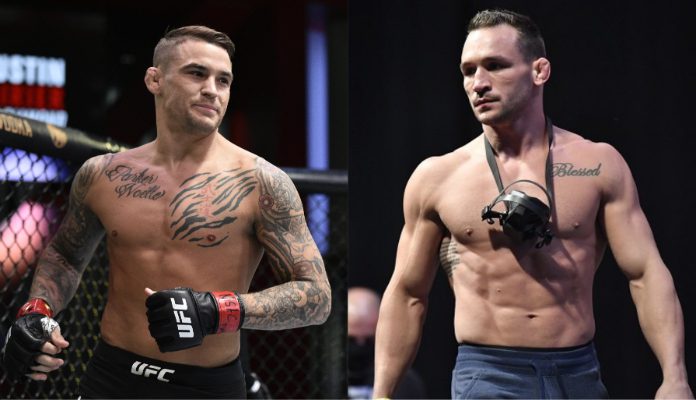 Poirier, 33, last fought back in December of 2021 where he went down to defeat against Charles Oliveira (33-9 MMA). Prior to that loss, ‘The Diamond’ had scored back-to-back wins against Conor McGregor (22-6 MMA) at UFC 264 and UFC 257 respectively.

Chandler, 36, comes into the Octagon having defeated Tony Ferguson (25-8 MMA) in May of this year at UFC 274. Prior to that victory, ‘Iron’ had lost two in a row to Justin Gaethje (23-4 MMA) and Charles Oliveira.

According to Michael Bisping, he has made his prediction as to who will be the lightweight winner at UFC 281.

‘The Count’, speaking on his YouTube channel, discussed the lightweight clash between Poirier and Chandler:

So, there you have it, Michael Bisping is picking Dustin Poirier for the win.

Do you agree with Bisping that Poirier can put Michael Chandler away at UFC 281?

This article appeared first on BJPENN.COM
Previous articleTJ Dillashaw explains why he feels Aljamain Sterling is still the “most beatable champion” despite loss at UFC 280
Next articleDan Hooker still confident he can become UFC champion despite losing skid: “Nothing else interests me except having the belt”
© Newspaper WordPress Theme by TagDiv