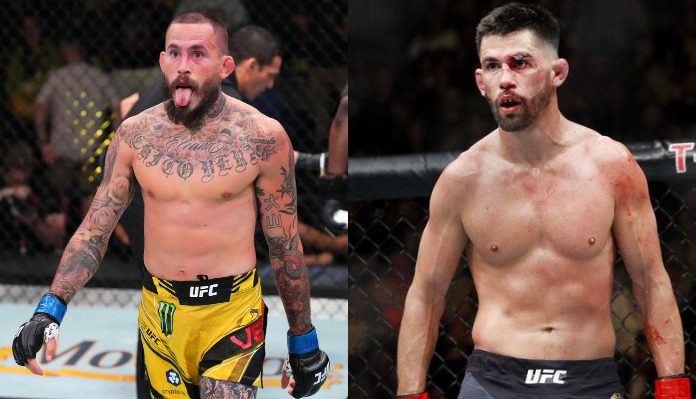 Marlon Vera will be headlining his second UFC card in a row as he will take on the former bantamweight champ Dominick Cruz.

According to ESPN Deportes, Vera and Cruz have agreed to headline a Fight Night card in August. The location of the event has not yet been determined. The fight is a crucial one for the bantamweight division as the winner could very well be fighting for gold their next time out.

Marlon Vera (19-7-1) is coming off his first career UFC main event where he beat Rob Font by decision back in April. Prior to that, he knocked out Frankie Edgar and beat Davey Grant by decision to get back into the win column after a decision loss to Jose Aldo.

The fifth-ranked bantamweight had been hinting he would face Petr Yan next, but recently turned his focus to Cruz on social media as well. In his career, Vera holds notable wins over Sean O’Malley, Brian Kelleher, Brad Pickett, and Frankie Saenz among others.

Dominick Cruz (24-3) is riding a two-fight win streak since making his comeback as he beat both Pedro Munhoz and Casey Kenney by decision. Before the wins, he had suffered a TKO loss to Henry Cejudo for the bantamweight title and a decision loss to Cody Garbrandt to lose his belt. The former bantamweight champ is ranked eighth and holds notable wins over Urijah Faber, TJ Dillashaw, Demetrious Johnson, Joseph Benavidez, and Ian McCall among others.

With Vera vs. Cruz serving as the main event, the August 13 card is as follows:

Who do you think will win, Marlon Vera or Dominick Cruz? Sound off in the comment section, PENN Nation!