Justin Gaethje believes rematch with Charles Oliveira or a clash with Rafael Fiziev could be next: “I need two wins, it doesn’t matter who”

UFC lightweight contender Justin Gaethje has a couple of fights in mind for his return.

‘The Highlight’ has been out of action since May at UFC 274. Standing opposite Gaethje was the-then lightweight champion, Charles Oliveira. The day prior to the event, ‘Do Bronx’ missed weight and was then stripped of his 155-pound gold.

Despite the weight miss, the headliner went on. In his second crack at undisputed gold, Gaethje came up short by first-round submission. Following the defeat, he announced his intention to take time off to get nose surgery.

Now, Justin Gaethje is fully healed up and targeting a return to the cage. Despite coming up short in his prior bids for UFC gold, he still believes he has what it takes to become champion. In order to get a title shot, he’s willing to do whatever it takes.

By that, he means a possible rematch with Charles Oliviera, as he revealed at UFC 281 media day. Gaethje also expressed interest in a clash with the fastly-rising Rafael Fiziev. ‘Ataman’ has been out of action since his knockout win over Rafael dos Anjos in July. 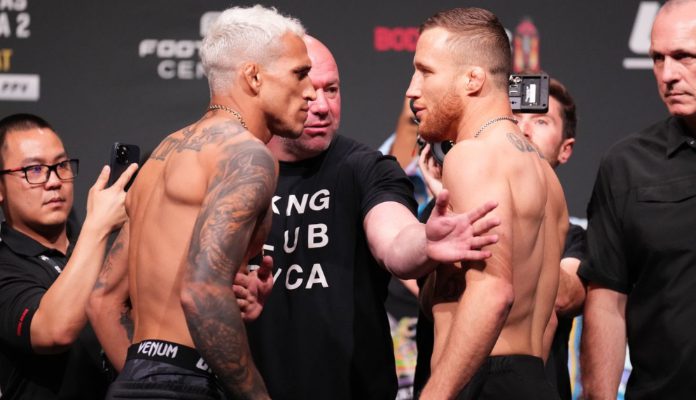 “They [Oliveira and Fiziev] both make just as much sense to me right now,” Gaethje stated during UFC 281 media day. “I need two wins, doesn’t matter who. They’re gonna be big fights. I don’t wanna fight just anybody, obviously. Both of those guys are possible fights for my next fight.”

He continued, “But again, my job is to stay out of my emotions. If I think about those fights, I get emotional, because that’s who we are as humans. I have to put the responsibility on the people that I trust, which is my coach, my manager, and they’re gonna pick the best fight for me, whoever that is.”

What do you make of these comments? Do you want to see those fights? Sound off in the comment section below PENN Nation!