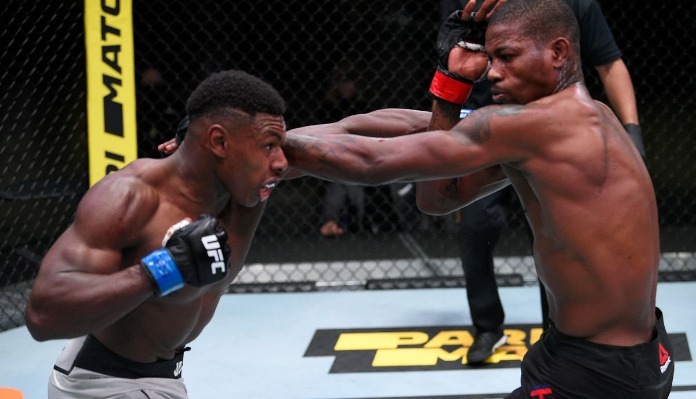 Buckley made his UFC debut against Holland and suffered a third-round TKO loss. Since the fight, both men have had ups and downs and ‘Trailblazer’ recently dropped to welterweight. During his time outside of the Octagon, Holland has made three heroic efforts in stopping criminals and helping citizens but Buckley doesn’t think it’s for real.

“Man, Kevin Holland, and not just because he beat me, he’s one of the fakest people in the game. That guy is a fake a** bitch,” Buckley said to Sportskeeda. “He’s got everyone looking the other way with all this Batman bullsh*t. Running around pretending he’s something else, but I know who he really is.”

Holland has taken down a gunman at a Houston restaurant as well as chasing down a carjacker. Most recently, he rescued a driver from an overturned tractor-trailer, but Buckley doesn’t think any of that is real.

Even though Joaquin Buckley is taking shots at Kevin Holland, he says he isn’t too worried about getting a rematch. He knows ‘Trailblazer’ is focused at welterweight for Buckley, the goal remains on getting the middleweight title.

“I’m not too worried about a rematch right now. He’s down at 170lbs trying to figure his shit out. I’m focused on getting to that middleweight belt,” Buckley added. “That’s why I’m here, that’s why I do this. But I could do welterweight in the future. I don’t actually have to cut that much weight to get to 185lb. So once I’ve got my belt here we can call Kamaru Usman since he wants to be a champ champ. But that’s way in the future for now.”

As of right now, Holland has yet to respond to Buckley’s comments calling him fake and pretending to be a hero.

What do you make of Joaquin Buckley trashing Kevin Holland?