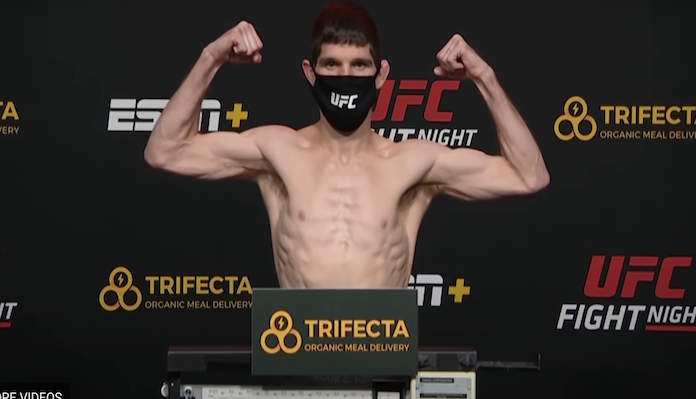 Former UFC flyweight Jimmy Flick explained what led to him walking away from the UFC, suggesting that “fighters are too stupid to unionize.”

Flick (16-5) announced over the weekend that he is walking away from mixed martial arts and the UFC at age 30. The announcement came as a complete shock for his fans, as Flick was set to fight Francisco Figueiredo in May, this coming off the heels of an incredible UFC debut in December where he submitted Cody Durden with a flying triangle choke. Overall, Flick had won four straight fights and with a win over Figueiredo, he likely would have fought a top-15 opponent next. Instead, the flyweight has decided to hang up his gloves.

Speaking to Mike Heck of MMAFighting.com, Flick explained his surprising decision to walk away from the sport. For Flick, it was nothing personal against the UFC as to why he hung up his gloves. But the fact there are no benefits to the fighters is something that bothered Flick, and it’s part of the reason why he decided to walk away at the peak of his career.

“I need to justify what I mean by that. The UFC never did me wrong. I love everything the UFC did for me. I love the goals that I got to get to the UFC, to the person it made me. But what I mean by that is there’s no benefits of beating my body up no more being in the UFC. We have no 401k. We have no benefits. We have no fallback. Fighters are too stupid to unionize, and it’ll never happen, because there’s other fighters that will fight for that money. I love the money I got, but this is just to go show everybody that money doesn’t buy happiness,” Flick said.

There have been many fighters over the years who retired out of the blue, but rarely were they coming off of a win in their UFC debut. But for Flick, it was never about the money, but rather about making sure that he was protected in the future. And in the absence of any sort of union, Flick wasn’t willing to take that chance. With a wife and two young children, Flick is confident he is making the right call to walk away now instead of later.

What do you think about Jimmy Flick retiring from the UFC at age 30?