Israel Adesanya has sent a warning to Robert Whittaker ahead of their highly anticipated rematch at UFC 271.

Adesanya (21-1 MMA) and Whittaker (23-5 MMA) are set to clash for the second time on February 12th in Houston with the promotions coveted middleweight title up for grabs.

Israel Adesanya and Robert Whittaker originally squared off in a title unification bout in October of 2019, with ‘Stylebender’ emerging victorious by way of a second round knockout.

Since then, Whittaker has gone a perfect 3-0, scoring unanimous decision victories over perennial division contenders Darren Till, Jared Cannonier and Kevin Gastelum.

As for Israel Adesanya, the UFC’s undisputed middleweight champion has gone 3-1 since defeating ‘The Reaper’ at UFC 243. ‘Stylebender’ most recently competed back in June, where he scored a unanimous decision victory over Marvin Vettori. 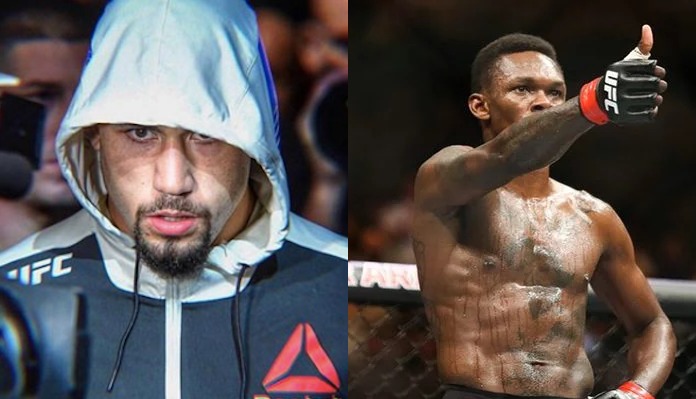 With their rematch now official for UFC 271, Israel Adesanya has sent a warning to Robert Whittaker on Twitter.

“Look in my eyes 🍯  Eat, sleep, train, repeat… It’s a plan that can’t be beat! This will be worse than the first time.” – Adesanya shared.

Izzy is currently a -260 betting favorite to defeat ‘Bobby Knuckles’ this coming February according to BetOnline. Whittaker is listed as the +220 betting underdog for the fight.

Who do you think will win when Israel Adesanya and Robert Whittaker clash for a second time at UFC 271? Share your thoughts in the comment section PENN Nation!