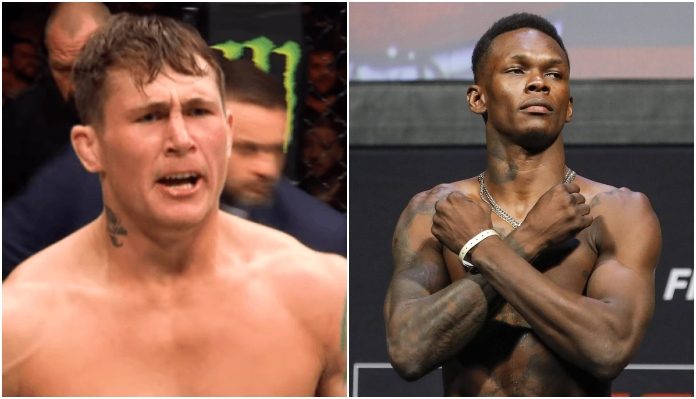 Israel Adesanya was seemingly not impressed with the actions of Darren Till at last Saturday’s UFC London event.

Till was in attendance at UFC London this past weekend, cornering his teammate Tom Aspinall in the main event.

It was Tom Aspinall (12-2 MMA) vs Alexander Volkov (34-10 MMA) in the heavyweight bout with the Englishman coming out the victor. Following the great win, Aspinall and Till jumped on top of the cage to celebrate, coaxing their home town fans to cheer louder.

Apparently Israel Adesanya, the UFC middleweight champion, while praising Aspinall for his performance, was not pleased with Darren Till. The two fighters have had words before and traded verbal jabs once again this weekend.

Although the two have said they would like to fight one another, Darren Till (18-4 MMA) is not ready for a title shot after losing fights to both Derek Brunson (23-8 MMA) and Robert Whittaker (24-6 MMA) in his most recent efforts.

Adesanya, posting to his YouTube channel, had this to say about Till getting on the cage with Aspinall after the win:

Israel Adesanya and friends continued to make fun of Till and commented that ‘he’s not won in a while’.

“Adesanya you idiot, Tom Aspinall asked me to get on the cage with him. Keep looking down on me for my losses, brother, it’s all good. I’ll be here one day, you watch…

“You haven’t looked the best either in your last few fights. Stay off the cocaine, it’s not healthy for fighters…”

‘The Last Stylebender’ maintains he would still like to fight ‘The Gorilla’ in England sometime in the near future. Perhaps the two fighters need to settle things once and for all in the cage.

Do you agree with Israel Adesanya that Darren Till should have laid low and let Tom Aspinall shine in his moment of fame? Would you like to see Adesanya vs Till? Share your thoughts in the comment section PENN Nation!