Gina Carano has been linked to fighting Ronda Rousey for years. Both women are Mixed Martial Arts icons and pioneers of the sport. Talk of a potential match-up has been stirred once again after ‘Rowdy’ said that the fighter-turned-actress was ‘the one person’ she would consider returning to MMA for.

Carano appeared on the JRE on Tuesday and confirmed that the feeling is mutual. She also told Joe Rogan how close she came to fighting Rousey for big money back in the day.

“I had my whole team in Vegas. So when Dana (White) and Lorenzo (Fertitta) invited me out – this had to have been five years ago, they said ‘we’d like to offer you a million dollar fight with Ronda.’

And I was like, ‘damn, what took you guys so long?’ said Carano.

Carano then detailed how she had asked Dana White to keep the proposed fight ‘quiet’ while she got her team together, but how the UFC boss went in the opposite direction and ultimately put her off the idea.

“You know Dana, he was like, ‘and I’ve got Gina Carano! And it’s going to be against Ronda Rousey!’ And he started pumping it out in twitter and he pumped it out in the interviews and I was like ‘whoah, calm down,’ explained the former Mandalorian star.

“It made everything so much more difficult. I was like, ‘if you just quiet down for a second I can find a team and I can get organised.’ And then he said something pretty aggressive over text message as I’m sure you know he does that,” she told Rogan, before adding,

“So I was like, okay, I’m not going to do that. It was very simple for me. That was going to be something for me and I was excited to be back in that world…But you can’t just go back into that world and feel disrespected on so many levels. And then I think another movie came up so I was just like ‘sweet, i’ll just go do this movie then.”

Carano retired from the sport with a 7-1 record after losing to Cris Cyborg in 2009. The fight was the first-ever women’s main event for a major MMA promotion. The 40-year old then went on to appear in numerous Hollywood films.

Despite being a full-time actress, the latest Rousey callout has clearly peaked her interest and she told Rogan,

“I can’t say that I wouldn’t (fight again.) And honestly I feel like she’s the one as well if I wanted to…you never lose that want to do it.”

Could MMA fans finally get to see Rousey vs Carano after all this time? 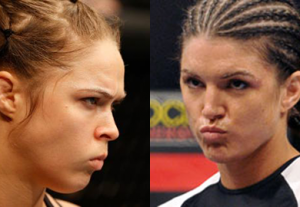 This article appeared first on BJPENN.COM
- Advertisement -
This article appeared first on BJPENN.COM
Previous articleConor McGregor claps back at Jorge Masvidal following accusations of cocaine use and ducking fights: “Me and your mom get along”
Next articleJorge Masvidal tells McGregor, ‘my mom loves you man’ after Irishman responds to cocaine comments