Frankie Edgar confirms retirement at UFC 281 is set in stone but is open to possible big boxing match: “If Manny Pacquiao wants to do an exhibition”

UFC bantamweight champion Frankie Edgar’s MMA career is coming to a close, but he’s open to other ventures.

‘The Answer’ has been out of action since his knockout loss to Marlon Vera last November. The loss was Edgar’s fourth in his last five contests, and his second straight stoppage. Following the defeat, the New Jersey native was quiet as to his future.

After taking some time off, he’s now set to return this Saturday at UFC 281. Standing opposite Edgar is the rising contender Chris Gutierrez. ‘El Guapo’ is currently riding a seven-fight winning streak, last defeating Danaa Batgerel by knockout in March.

The fight is a significant one, as it will be Frankie Edgar’s final MMA fight. However, as it turns out, he might not be done competing after all. For now, he’s just done fighting in the octagon.

At UFC 281 media day, the former lightweight champion gave fans a glimpse into his future plans. Edgar revealed that while he’s done competing in MMA, he is open to boxing. Specifically, the former champion suggested an exhibition with Manny Pacquiao. 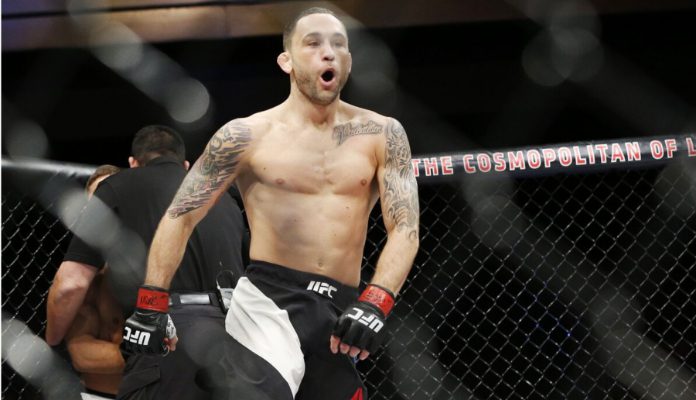 “This is my last UFC fight, my last MMA fight for sure,” stated Edgar at UFC 281 media day. “Most likely, one hundred percent it’s my last fight. But, if there’s some boxing out there, if Manny Pacquiao wants to do an exhibition, I know he’s doing exhibitions now. I can be open to something crazy like that. But it would have to be a really, really good one.”

He continued, “I’m definitely thinking about [how it’s my last time competing in the UFC]. Y’know, it’s all real. I just keep saying it to my teammates… But again, the fight is the sole focus. Yeah, I’ve been getting nothing but love man. It feels good, and just shows that I’ve been doing things right my whole career.”

In the event that Frankie Edgar does have a boxing match, he’d far from the first MMA fighter to head to the ring. Several names such as Anderson Silva and Tyron Woodley have competed in several high-profile boxing matches as of late.

What do you make of these comments? Do you want to see a possible boxing match? Sound off in the comment section below PENN Nation!