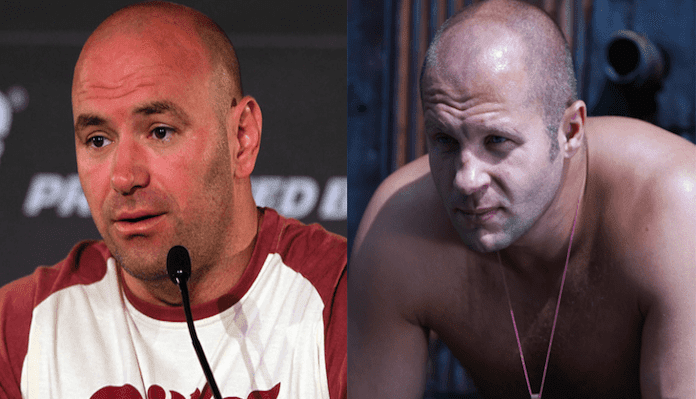 Emelianenko is one of the greatest MMA fighters of all time, having fought for many of the top fight promotions in the sport’s history. The Russian currently stars for Bellator MMA, where this weekend he fights UFC veteran Tim Johnson in a heavyweight bout that headlines Bellator 269. There is a chance that this could be the final fight of Emelianenko’s incredible MMA career, and if it’s the case, then he would do so without having fought for the UFC. It’s arguably the biggest “what if” story in mixed martial arts history as Emelianenko was never able to prove his heavyweight greatness at the UFC level.

Ahead of his fight against Johnson this weekend, Emelianenko spoke to the media and, naturally, he was asked about never signing with the UFC. According to “The Last Emperor,” he never signed with the UFC in part because of his disdain for White. As far as Emelianenko goes, White only cares about money and that turned Emelianenko off of him.

“A very unfavorable impression. Money means everything to him, he has no respect towards fighters, no respect for any human being. Only money and that’s all,” Emelianenko told TASS.

“There is nothing humane about him and I found that quite revolting. Money, of course, is important for living and for the family. But trading human relations for money is unacceptable.”

It will be interesting to see if White responds to these remarks from Emelianenko. There was a time where it seemed like the Russian legend would eventually end up in the UFC, but that never happened, and based on these comments, it’s unlikely that it ever will.

Are you surprised by these comments from Fedor Emelianenko towards Dana White?