Erin Blanchfield admits she didn’t expect Molly McCann to tap at UFC 281, offers predictions for 2023: “I was definitely prepared to dislocate her arm”

‘Cold Blooded’ returned to the octagon last Saturday at UFC 281 in New York City. Standing opposite the rising contender was fan-favorite Molly McCann. ‘Meatball’ was riding a three-fight winning streak, with two brutal knockouts coming in.

There wasn’t another dramatic knockout from the Liverpool native last Saturday, however. Instead, it was one-way traffic from Blanchfield. She bludgeoned McCann en route to a first-round submission, as the Brit was forced to tap due to a kimura.

Luckily, Molly McCann walked away without injuries as she tapped to the submission. That’s a good thing, as Erin Blanchfield revealed on The MMA Hour. There, the 23-year-old stated that she didn’t expect McCann to tap, and was prepared to dislocate her arm if needed.

Beyond that fight, the fastly-rising contender has given a prediction for 2023. In a year’s time, Blanchfield opined that she will be fighting and likely beating someone in the top five of the 125-pound division. 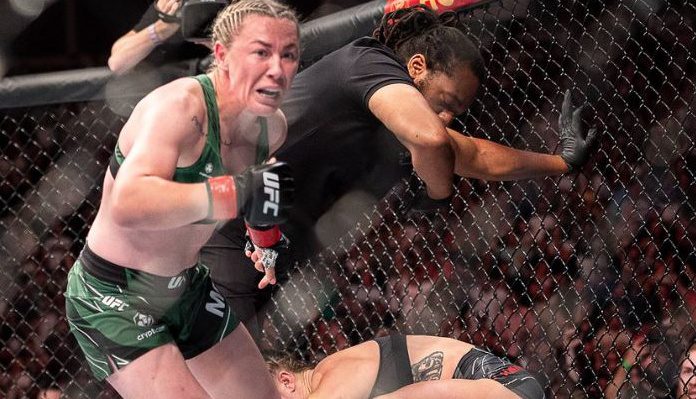 “I remember even before the fight thinking I was probably going to have to choke her unconscious or something like that,” stated Blanchfield on The MMA Hour. “I didn’t think she would tap to an armbar or kimura or something like that. In the fight, I just went there and I knew I had the position in so-tight, I was almost waiting to see if she’d let it pop.”

She continued, “I’ve popped other people’s shoulders before so I know what it felt like. She let it get pretty close, and I knew if I cranked it anymore it would have dislocated. I was definitely prepared to dislocate her arm and the ref would’ve probably stopped it, in between rounds or something. She let it go, but she tapped early enough.”

What do you make of her comments? Sound off in the comment section below PENN Nation!

This article appeared first on BJPENN.COM
Previous articleIsrael Adesanya explains disappointment with referee stoppage in Alex Pereira title fight at UFC 281: “You’ve seen where I can go to”
Next articleAndre Petroski disappointed he lost his 100 percent finish rate at UFC 281, believes he’d submit Bo Nickal: “I don’t think he has that dog in him”
© Newspaper WordPress Theme by TagDiv