It was Dominick Reyes (12-4 MMA) vs Ryan Spann (21-7 MMA) in the light heavyweight event at Madison Square Garden in New York City this past Saturday, November 12th. It was Spann, 31, who flattened Reyes with a brutal first round knockout.

It was to be Dominick Reyes’ fourth straight loss in the Octagon. An underwhelming record for sure, as he was defeated by Jon Jones (26-1 MMA) back in February of 2020 at UFC 247, then defeated by Jan Blanchowicz  (29-9 MMA) in September of the same year at UFC 253. In May of 2021, another loss came for ‘The Devastator’ against Jiri Prochazka (29-3 MMA). 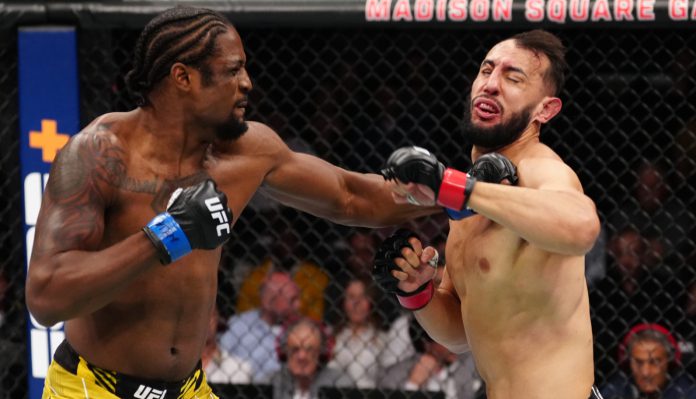 Three of Reyes four recent losses in the Octagon have come by KO or TKO. However, prior to those losses Reyes had 12 consecutive wins in the cage.

Dana White was asked about Dominick Reyes and his current status within the UFC at the post fight press conference and said (h/t MMANews):

“Yeah, it’s almost like he hasn’t been the same since that Jon Jones fight.”

“I don’t know. I don’t know right now. I think, first and foremost, I would see what he wants to do. What does he want to do? And where’s he at mentally? And what’s he thinkin’?”

Reyes did issue a statement on ‘Twitter’ following the loss where he expressed his thanks for the support and his intention to continue to fight:

“I was hungry to get my hand raised and rushed the fight. I’m OK, I live to fight another day. Another lesson learned. Congrats to (Alex Pereira). What an incredible performance to become the middleweight champion. God is good always. Thank you to my friends and family who support me, to my management (Tiki Ghosn and Julian Gregorio). And big thank you to (Glover Teixeira and Fernely Feliz Sr.) for the camp and believing in me. I’ll be back, just have to shake it off and get back in there. Big thank you to the (UFC, Dana White, and Madison Square Garden) for the opportunity. The energy was amazing last night and it felt great to be in the arena again!”

Do you agree with Dana White’s commentary about Reyes? Do you think the Californian can shake off the last four defeats and get back in the win column? Who would you like to see Reyes fight next?