Curtis Blaydes shoots down the idea of a rematch with Tom Aspinall after UFC London: “I’m not risking my ranking, I won the fight”

Blaydes and Aspinall headlined UFC London on Saturday night in what was supposed to be a massive fight for the heavyweight division. However, just 15 seconds into the scrap, the fight was over as Aspinall appeared to blow out his knee.

“I have no idea what happened. He landed the kick, I went to counter, he dropped. That’s all I know,” Blaydes said at the UFC London post-fight press conference (via MMAMania). “I’m frustrated. No one wants to win like that. I get the win, I hold my ranking. I get the money, but without a highlight, did it even happen? Did the fight even happen?” 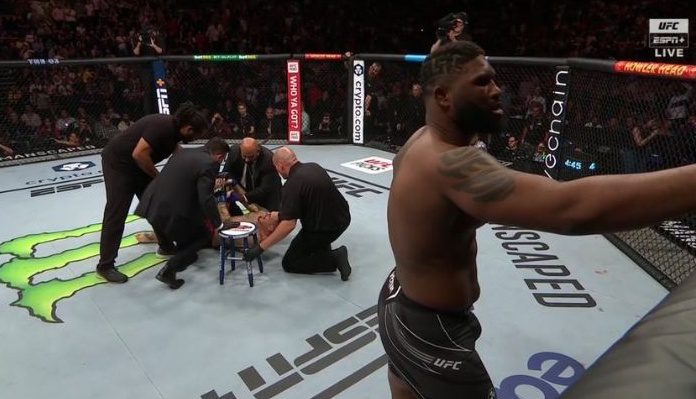 Although Blaydes admits the ending of the fight was not ideal, he doesn’t see a need in rematching Aspinall.

In the lead-up to UFC London, Curtis Blaydes made it known he wanted to fight the winner of Ciryl Gane vs. Tai Tuivasa next time out. It makes a lot of sense and for Blaydes, he says he doesn’t want to wait around for Aspinall to heal up to run it back.

“I’m not risking my ranking (with a rematch),” Blaydes said. “I won the fight. Heading into this fight I envisioned the winner, which is me, would be fighting the winner of Tuivasa and Gane. So, I’m not going to pass up an opportunity to fight those guys when it’s right there to wait for Tom Aspinall to heal and run it back.”

Although Curtis Blaydes doesn’t want to run it back with Tom Aspinall, it does seem likely that the two will meet again in the future. Both are still young for the heavyweight division and near the top of the rankings, so a rematch will likely happen.

Do you think we will see Curtis Blaydes and Tom Aspinall fight in the future?

This article appeared first on BJPENN.COM
- Advertisement -
This article appeared first on BJPENN.COM
Previous articleWhat’s next for Curtis Blaydes and Tom Aspinall after UFC London?
Next articleJimi Manuwa disagrees with Daniel Cormier, other fighters telling Alexander Gustafsson to retire after UFC London: “I don’t think other fighters or fans should be telling fighters to retire”